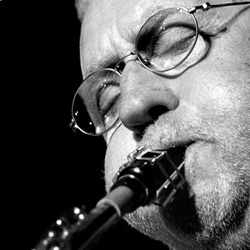 A special appearance by modern jazz pioneer Lee Konitz and his New Quartet kicks off the School of Music 2010-11 concert season.

The alto saxophonist, an iconic figure in modern jazz who has performed and collaborated with many of the greatest names in jazz, will be in Seattle for an engagement at the Triple Door nightclub on Oct. 5.

The Quartet--Konitz and the members of Trio Minsarah (Florian Weber, piano; Jeff Denson, bass; and Ziv Ravitz drums)--will appear at the School of Music's Brechemin Auditorium on Monday, Oct. 4 at 12:30 p.m. The event will likely include performance, discussion, and a question-and-answer session, and is free and open to the public.

Konitz's early collaborations included turns with the Claude Thornhill Orchestra (arranged by Gil Evans), Stan Kenton's Orchestra, the innovative small groups of Lennie Tristano, and the Miles Davis Capitol Orchestra. He then turned freelance and has since remained on the cutting edge of post-bop improvisation.

His continuing interest in playing with younger players led him to his current collaboration with the members of Trio Minsarah, who met while students at the Berklee School of Music in Boston. Konitz was won over by the group after seeing them perform in Cologne, Germany some years ago.

"I never really had a band full time; instead I always played with different people on invitation," Konitz said after working with the musicians on an album titled Lee Konitz New Quartet: Live at the Village Vanguard. With the group, he said, "I could truly improvise and enjoyed everything everyone was contributing to the music: creativity and being spiritually and profoundly on the same wavelength. This four-voice group playing together and being interested in each other on a personal and musical level is what having a band means to me."