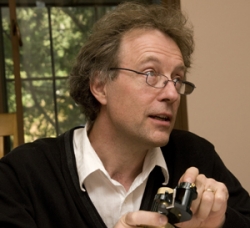 Composition professor Joel-Francois Durand has been named one of the University's inaugural UW Entrepreneurial Faculty Fellows in recognition of his innovative work in developing a high-end audio tonearm known as the Talea.

The fellowship program was established recently by Interim President Phyllis Wise as a way to acknowledge the value that UW faculty entrepreneurship brings to the academy, the region, and to society.

Candidates for the honor were nominated by department chairs and technology managers from the UW's Center for Commercialization (C4C) and evaluated by a committee composed of deans and vice deans Ana Mari Cauce (Arts and Sciences), Matt O'Donnell (Engineering) and John Slattery (Medicine), Interim President Wise, and C4C Director of Licensing Fiona Wills.

Fellows were selected based on commercialization experience and motivation and ability to share knowledge with other UW personnel. They will be identified as potential mentors to UW faculty, researchers, and staff in their own commercialization ventures.

Funds attached to the fellowship ($5,000 per year for up to two years) may be applied toward commercialization activities such as travel, research, and market analysis.

Durand has continued to further develop and perfect his tonearm design, which has been received favorably by audiophiles around the world seeking the gold standard in high-fidelity stereo equipment.

Read more about the Talea and Durand's process of invention here: