Homayun Sakhi next up on Performing Ethnomusicology Series 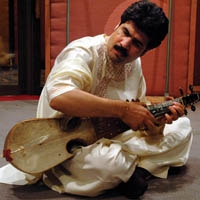 A concert and demonstration by renowned Afghan rabab player Homayun Sakhi at the School of Music on January 21 is the next event in the School's Performing Ethnomusicology Series, running through Winter Quarter 2011.

The series of lectures, seminars, concerts and workshops organized by the school's Ethnomusicology division focuses on musical traditions from around the world and is bringing to the University of Washington campus leading scholars and performers in those genres.

Homayun Sakhi was born in Kabul in 1976 into one of Afghanistan's leading musical families. From the age of ten, he studied rabab (short-necked lute) with his father, Ghulam Sakhi, a disciple and brother-in-law of Ustad Mohammad Omar, the much-revered heir to a musical lineage that began in the 1860s.

In this special guest artist concert, Homayun Sakhi performs Afghan traditional music on the rabab joined by noted percussionist Salar Nader, tabla. He also leads a free discussion/demonstration of the Afghan rabab earlier in the day at Brechemin Auditorium.

Other performers coming up on the series include Turkish Ud player Munir Beken and Senagalese percussionist Thione Diop. In addition, scholars from the University of California, University of British Columbia, and the Universidad Nacional Autonoma de Mexico will present an array of seminars, workshops, and lectures, all of which are free and open to the public.

Most performance events in the series also are free, with the exception of the January 21 concert by Homayun Sakhi. Tickets for that performance, which is at 7:30 p.m. in Brechemin Auditorium, are $10, and music major performance passes and Notecards will be honored.

January 21: Homayun Sakhi
Homayun Sakhi was born in Kabul in 1976 into one of Afghanistan's leading musical families. From the age of ten, he studied rabab (short-necked lute) with his father, Ghulam Sakhi, a disciple and brother-in-law of Ustad Mohammad Omar, the much-revered heir to a musical lineage that began in the 1860s. After living for years in exile in Peshawar, Pakistan, Sakhi moved to Fremont, California to continue teaching and performing.

February 4: Jocelyn Guilbault
Professor of Ethnomusicology at the University of California, Berkeley, Jocelyne Guilbault specializes in theory and method in popular music studies, politics of aesthetics, and issues dealing with power relations in music production and circulation. She has conducted extensive fieldwork in the French Creole- and English-speaking islands of the Caribbean on both traditional and popular music.