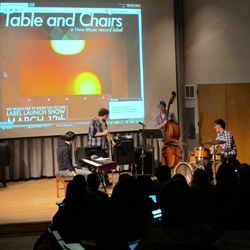 Current and former UW music students are deeply involved in the establishment of a new local record label, Table and Chairs, which celebrates its launch Saturday, March 12, at Seattle's Q. Cafe.

The offshoot of an interactive artistic community with strong ties to the UW Jazz Studies Program, the label and the organization of the same name emerged from a weekly improvisation event, The Racer Sessions, organized by School of Music jazz bass instructor Luke Bergman and held every Sunday at Seattle's Cafe Racer with the involvement of numerous School of Music students and alumni.

Devoted to the development of New Music, Table and Chairs hopes to maintain a tangible presence in the Seattle music community and beyond through regular label performances and quarterly band showcases in addition to releasing new works by its roster of artists.

"We aim to differentiate ourselves from typical label models," says Ivan Arteaga, the group's press director. "Our constituents function as artists individually, and collectively as a promotional support system for our musical works."

Current and former UW music students involved in the creation of Table and Chairs include Arteaga, Bergman, Jared Borkowski, Evan Woodle, Neil Welch, David Balatero, Chris Icasiano, Vincent LaBelle, Aaron Otheim, and Andrew Swanson, among others who will be releasing music on the label. In addition, one of the groups in the label's roster of artists, AGOGIC, is a new quartet led by Jazz Studies Professor Cuong Vu and New-York based saxophonist Andrew D'Angelo, with alumnus (and current Jazz Studies bass instructor) Luke Bergman on bass and current School of Music student Evan Woodle on drums. The group, which is already garnering rave reviews nationally, recently released its first CD on the label.

More information on Table and Chairs and its launch party is available here.