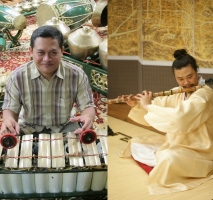 The Division of Ethnomusicology welcomes visiting artists Young Sub Lee of Korea and Heri Purwanto of Java to the School of Music during Spring Quarter 2011. In addition to teaching classes and working with individual students, both artists will be featured in the Division's annual Ethnomusicology Visiting Artists Concert Thursday, April 26, 7:30 p.m., at Meany Theater.

Young Sub Lee is a talented young artist of Korean traditional music who specializes in wind instruments, such as daegum (bamboo flute), sogum (small bamboo flute), danso (vertical small flute), and taepyeongso (the double-reed Korean oboe), as well as some of the most popular percussion instruments, including janggo (hour-glass drum) and buk (barrel drum). He also is a performer and composer of experimental music and jazz.

He studied daegum as an undergraduate student and composition in the graduate program at Chugye University of Arts, receiving several first prizes in prestigious Korean music competitions. From 2002 to 2006, Mr. Lee was an active, principal member of the orchestra at the National Center for Korean Traditional Performing Arts in Seoul. In 2007, he released a commercial recording for danso titled Gajeun Hoesang. An instrumental ensemble member of the world music group VinaLog, he also is a permanent conductor and full-time composer for the Korean Traditional Youth Orchestra. He is an instructor in the Graduate School of Education at Chugye University of Arts.

Mr. Lee's residency at the UW is made possible with the support of the Korean Traditional Performing Arts Foundation and Northwest Heritage Resources.

Heri Purwanto is a highly respected teacher and performer from Central Java and master musician of the Javanese gamelan. He previously taught gamelan at the University of California-Berkeley, where he served as director of Gamelan Sari Raras, a performing ensemble in the Department of Music at UC Berkeley that includes students and former students at Berkeley as well as musicians from surrounding communities. In addition to working with students in the School of Music during spring quarter, he will be featured drummer with Seattle's Gamelan Pacifica and guest dancer Didik Nini Thomok during the School's April 26 Ethnomusicology Visiting Artists Concert.

Mr. Purwanto's residency at the University of Washington has been made possible with the support of the School of Music and the Southeast Asian Studies program, with arrangements by Professor Christina Sunnardi.

Details about the April 26 concert are available here.