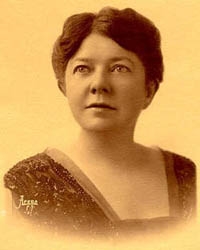 Judy Tsou, head of the Music Library, discovered a long-lost unpublished manuscript by American songwriter Amy Beach last summer during an inventory project in the Music Library. The song, "Birth," written in 1929, was premiered by soprano Nataly Wickham at the spring 2010 Voice Division Recital. She was accompanied by pianist Rhonda Kline of the School of Music faculty. Hear a recording of the performance below.

A summer project to inventory uncataloged manuscripts in the Music Library resulted in the discovery of a previously unpublished two-page song, "Birth," by Amy Beach (1867-1944). Amy Marcy Beach, who preferred to be known as Mrs. H. H. A. Beach in the United States during her life, was the first American woman to write a symphony and other large scale works, including an opera (Cabildo). She composed over 170 works; about 110 of them are songs. This prolific composer was well recognized both as a composer and a pianist during her time. She toured extensively as a concert pianist before her marriage and after her husband's death.

During her marriage, she was focused on composing music at the request of her husband, Dr. Henry Harris Aubrey Beach (1843-1910), a surgeon at the Massachusetts General Hospital. She continued composing after her husband's death until late in life. Her Gaelic Symphony was premiered by the Boston Symphony in 1897 under the baton of famed conductor Emil Paur; other famous conductors such as Leopold Stokowski of the Philadelphia Orchestra and Frederick Stock of the Chicago Symphony also performed her symphony and piano concerto. A contemporary composer, George Chadwick, praised her symphony and called her "one of the boys," an intended compliment that reflects the small value society placed on women's compositions at the time.

The manuscript of this song is itself undated, but Beach biographer Adrienne Fried Block dates it 1929, putting it in Beach's third and last compositional style. The music is modernist and the text is conservative. Biographer Block says, "Beach, who rejected the more extreme compositional practices of Varese, Stravinsky, or Schoenberg, was moved--despite her conservative pronouncements--to experiment with modern idioms. Indeed, she wanted to be thought of as an up-to-date composer and took steps, largely unrecognized, to change with the times."[1] The catalyst for the change in her musical style was her acquaintance with younger composers, such as Marion Bauer, while at the MacDowell Colony. In addition, Beach was exposed to the modernist music of Debussy and others during her trips to Europe. Indeed, the accompaniment of this song, at times, hints at the famous parallel chords of Debussy.

Despite her modernist outlook in music, Beach became more devout later in life, and the text of this song reflects her conservatism. The poem was written by fellow New Englander Frederic Lawrence Knowles (1869-1905), and it describes the miraculous and sacred nature of birth as an act of God. The music parallels the act of birth, from darkness to light, from dissonance to harmony. The darkness is signified by the dark low register of the piano accompaniment in the beginning of the piece, with both hands in bass clef, to the extreme high register at the end of the song with both hands in treble clef; it spans five octaves. Similarly, the accompaniment is made up of dissonant chords until the fourth phrase, the birth of the child. The vocal line, too, includes modernist augmented intervals of seconds and fourths until this point. At the words "and lo," the dissonant augmented intervals disappear, and instead the voice outlines a perfect fourth, followed by a stepwise descent to E-flat, the fifth scale degree of the overall A-flat major tonality in this section. This musical resolution at the end of the composition signifies the birth of the child in the text.

Knowles's poem was a gift from mezzo-soprano Emma Roberts to Beach in 1926 while she was recovering from surgery; it reportedly gave her comfort during a particularly difficult night. Uncharacteristically for Beach, the song, for contralto and piano, did not have a dedicatee. Although Beach often dedicated music to the person connected to the composition, in this case, the voice type (contralto) for the song does not match that of the donor (mezzo-soprano); it is unlikely that the piece was written for Roberts.

This manuscript is part of the Hazel Kinscella Collection. Hazel Kinscella (1893-1960) was on the faculty at the School of Music from 1942 to 1958. She received a master's degree from Columbia University (1934) and studied piano with Rafael Joseffy (1852-1915) in New York City before coming to UW and received the Ph. D. in 1941. Previously, she taught at the University of Nebraska (1918-38), and in 1919, she began a series of state school piano classes in Lincoln, Nebraska. Kinscella, a pedagogue, composer, writer, and music historian had published 43 books on a variety of subjects; there are eight unpublished book manuscripts in her collection. She was also a prolific composer.

Kinscella met Beach in 1918, when she accompanied her artist mother to the MacDowell Colony for the summer. Mrs. Marian MacDowell, widow of composer Edward MacDowell and owner of the Colony, was a good friend of Amy Beach and provided the introductory letter for Kinscella to approach Beach for an interview, which was published in Musical America.[2] Although no correspondence between Kinscella and Beach can be located, there is other epistolary and documentary evidence of their friendship throughout Beach's life. In 1918, after her return from the MacDowell Colony, Hazel Kinscella sent Amy Beach a Native American melody, which Beach used in the piano piece "From Blackbird Hills" (1922). Beach dedicated the piece to Kinscella and sent her an inscribed copy: "To Miss Kinscella, with sincere appreciation of her gift of this melody. Amy Beach." In addition, a postcard from Kinscella to Ruth Schaffner (UNH Special Collections), a soprano and close friend of Beach, says, "I'll always know some of the many reasons why Mrs. Beach loved you so." Obviously, Kinscella had to have known Beach fairly well to have made the comment. Another letter, from Walter Jenkins to Kinscella, dated 27 June 1960, indicates that Kinscella had written Jenkins the previous summer about her friendship with Beach. The letter, in part, is quoted in Jenkins' book,[3] indicating how Kinscella met Beach.

Kinscella and Beach remained friends for the rest of Beach's life, and in 1935, Beach contributed an essay to Kinscella's book Music in the Air. And we know that Kinscella visited Beach in 1937 from Beach's own diary entry on June 21.

We do not know how Kinscella acquired this manuscript because correspondence between Beach and Kinscella cannot be found. Beach could have given her the manuscript as a token of their friendship. There are two other manuscripts by Beach in Kinscella's collection: the choral piece, "I will give thanks," from Psalm 111, and a piano arrangement of her song "Far Awa'," both of which have been previously published.