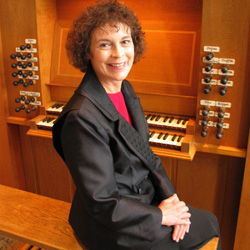 Faculty, students, and guest artists will perform in a special series of concerts throughout 2011-12 to commemorate the 20th anniversary of the UW's Littlefield Organ Series. The series, which gets under way Friday, Oct. 28 with the popular annual Halloween organ concert, continues in November with recitals by noted Northwest organists and UW faculty members Carole Terry and Douglas Cleveland performing with faculty colleagues from the UW School of Music. Guest artists Robert Huw Morgan of Stanford University and duo organists Naomi Shiga and Jonathan Wohlers are among other performers appearing over the course of the series.

Installed in 1990, the Littlefield Organ, housed in the Walker-Ames Room of the UW's Kane Hall, is a tracker action organ modeled after 17th Century German and Dutch instruments. Featuring 979 pipes in 18 ranks, ranging from 10 feet in length to the size of a pencil, the organ includes nine types of wood - fir, oak, redwood, Brazilian mahogany, sugar pine, ebony, maple, poplar, and European beech.

Constructed by Paul Fritts & Company Organ Builders of Tacoma, the organ is dedicated to brothers Edmund and Jacques Littlefield, whose gift to the School of Music enabled the organ's construction.

Installation of a major organ for the University of Washington was a long-held dream of former organ professor Walter Eichinger, who taught at the UW from 1936 to 1979. Together with his successor, Professor Carole Terry, who led the fundraising effort that resulted in the organ's installation, the two educators represent a legacy of excellence in organ pedagogy at the School of Music spanning 75 years. The School's organ program, which was founded in the early 1900s, has graduated hundreds of organists under their tutelage, and many of them have gone on to distinguished careers in major churches and universities throughout the country.

Tickets for Littlefield Organ Series events are $15, available at the door. All events are held in the Walker-Ames Room of Kane Hall, and doors open 30 minutes prior to showtime.

Upcoming Events in This Series:

Students of Carole Terry perform works for organ set to choreography by students from the UW Dance Program.

Robert Huw Morgan, University Organist at Stanford University, performs works by Bach and others in this program highlighting well-known Baroque and Renaissance composers.

Duo organists Naomi Shiga and Jonathan Wohlers present a concert of solo and duo works for organ, featuring music for two organists by W.A. Mozart and from the German Romantic.