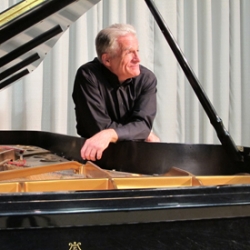 School of Music pianist Craig Sheppard stages a grand celebration of the 200th anniversary of the birth of Hungarian composer Franz Liszt with an ambitious program at Meany Theater on Friday, October 21.

Sheppard’s performance of the first two books of Les Années de Pèlerinage (Years of Pilgrimage), considered to be among the composer’s most significant works for solo piano, will get underway as classical music lovers the world over observe the milestone anniversary of the composer’s birth on October 22, 1811.

Inspired by broad Swiss landscapes and great Italian works of art, the first two (of three) volumes of Années de Pèlerinage were a direct result of Liszt’s eleven-year romantic attachment to La Comtesse Marie D’Agoult, a member of the highest echelons of French aristocracy and the mother of his three children.

Her affair with Liszt, commencing in 1833, caused a scandal of such proportions that the couple was forced to leave Paris in 1835, absconding first to Switzerland, then to Italy. Their wanderings lasted four years, until they separated in Florence in 1839.

By that point, Liszt had composed eight pieces for the Album d’un voyageur (Album of a Voyager/Wanderer). Inspired to a large extent by Swiss landscapes, with literary references taken from Lord Byron, Sénancour and Schiller, these pieces were to form the nucleus of the eventual first volume of Années, Suisse (Switzerland).

The impetus for the second volume, Italie (Italy), came from Liszt’s earliest vocal settings, composed in the late 1830s, of Tre Sonnette di Petrarca (Three Petrarch Sonnets), with the subsequent inclusion of works of art by Raphael and Michelangelo and readings from Dante’s La Divina Commedia (The Divine Comedy).

Both volumes were given their final touches during Liszt’s Weimar years (1848-1861), and were published during that period under the title by which we know them today, Années de Pèlerinage.

“These two volumes, combining art, literature and music, are the nineteenth century equivalent of present-day multimedia,” Sheppard says. “They represent Liszt’s firm belief in the cross-pollination of the arts, and as such are representative of the greatest of Liszt’s piano compositions.”

Sheppard’s concert, which gets underway at 7:30 p.m. on Friday, Oct. 21, is the first of two Meany performances by the pianist scheduled for 2011-12. He also appears at Meany on Friday, April 20 to perform the fourth in his five-recital series Mostly Brahms.

Ticket details and more information about the October 21 concert is available here.