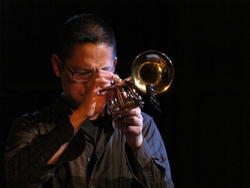 Assistant Professor Cuong Vu and former and current Jazz Studies students will appear with the Seattle Symphony October 18 on “Sonic Evolution,” a program of new symphonic compositions celebrating the past and future of Seattle’s music scene.

Cuong Vu, trumpet; Jazz Studies alumnus (and current Jazz Studies instructor) Luke Bergman, bass; and current students Gus Carns, piano; and Evan Woodle, percussion; will join with Seattle Symphony and new conductor Ludovic Morlot to present the world premiere of Vu’s composition ONE, a commentary on the musical legacy of Quincy Jones. The piece will be presented alongside other new works commissioned by Seattle Symphony that pay homage to Seattle musicians Jimi Hendrix and Kurt Cobain.

The program is part of the debut season for the Symphony's new Music Director Ludovic Morlot, whose artistic mission includes a strong interest in exploring music that crosses barriers and exposes audiences to groundbreaking work past, present, and future. Vu's composition will be featured alongside new symphonic compositions by William Brittelle and Vladimir Nikolaev.

Though he has written many original works for his own musical projects, ONE is Vu's first commission for a prominent symphony orchestra. "It was a no-brainer to accept the commission," he says, but admits that the experience provoked some conflicting thoughts and emotions. "I feel extremely fortunate to have this opportunity that the Seattle Symphony offered me while being very shy about it. I feel that there are so many composers that are more deserving of this opportunity and that the great living composers of our times should be programmed more often. So it's a mixed bag of feeling grateful but uncomfortable."

Also appearing on the program is Seattle indie pop group Hey Marseilles, founded by former University of Washington students Nick Ward and Matt Bishop. The group has collaborated with composer Phillip Peterson to create a new work for Seattle Symphony and new arrangements of existing works.

For more detail, or to purchase tickets for the program, which takes place Tuesday, Oct. 18, 7:30 p.m., at the S. Mark Taper Foundation Auditorium at Benaroya Hall, visit the Seattle Symphony online here.