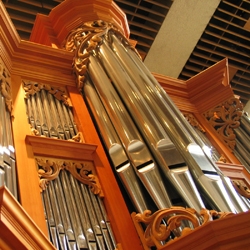 The University of Washington School of Music continues its celebration of the 20th anniversary of the Littlefield Organ series with The Littlefield Organ Festival, a weekend of faculty recitals by organ faculty Carole Terry and Douglas Cleveland. The festival gets underway on Friday, November 18 with a recital by Douglas Cleveland, joined by saxophonist Michael Brockman; and concludes on Monday, November 21 with a recital by Carole Terry, joined by flutist Donna Shin.

Director of Music and Organist at Plymouth Church in Seattle since 2004, Douglas Cleveland was appointed to the music faculty at the UW School of Music in September of 2009. He teaches courses in Sacred Music. His Nov. 18 recital will include solo works for organ by J.S. Bach and Felix Mendelssohn. He also will perform a series of works for organ and saxophone, joined by faculty artist Michael Brockman. Together, they will perform original works by Brockman as well as selections by Richard Proulx, Frank Ferko, and David Evan Thomas.

On Monday, Nov. 21, Professor Carole Terry commands the Littlefield Organ for a program of works for organ and for organ with flute. She is joined on the program by faculty flutist Donna Shin. Program selections include Bach's Passacaglia and Fugue in C minor; Mendelssohn’s Sonata No. 4; works by Buxtehude, and sonatas by Handel and C.P.E. Bach, (featuring flutist Donna Shin).

Director of the UW’s organ program since 1980, Terry is a renowned performer and pedagogue whose career has taken her throughout the United States, Europe, and the Far East. In addition to her many other career accomplishments, she served as Resident Organist and Curator for the Seattle Symphony from 2000 to 2003, helping to inaugurate the new C.B. Fisk organ at Benaroya Hall. In 2004, she was honored to be the first American organist to perform in Perm, Russian Federation, on the new Glatter-Götz Organ of the Perm Concert Hall.

Tickets for both concerts, which begin at 7:30 p.m. at the Walker-Ames Room, Kane Hall, are $15 cash or check at the door.