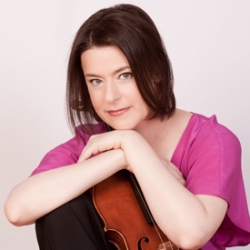 Composers from Liszt to Ligeti will be featured in performances by faculty, students, and guest artists during Winter Quarter at the School of Music, which kicks off its quarterly concert calendar this month with a pair of faculty recitals by violist Melia Watras and pianist Robin McCabe.

A January 11 recital at Meany Theater by faculty violist Melia Watras will spotlight works for solo viola composed during the past 50 years. Long a champion of the works of living composers, Watras is a leading figure in the American new music scene, both as a soloist and as co-founder of the award-winning Corigliano Quartet. Along with pieces by 20th century masters György Ligeti, György Kurtág, and Iannis Xenakis, Watras’s program, “Viola Circa 2000,” will include world premieres of works by American composer Andrew Waggoner and rising star Shih-Wei Lo, a graduate student in Composition at the School of Music.

Later in January, Meany Theater plays host to faculty artist Robin McCabe, presenting a rare solo piano recital at the UW on Tuesday, January 24.  Her program includes the Bach-Busoni Chaconne, the “Kreisleriana” of Robert Schumann, and selections by Franz Liszt, including the Concert Paraphrase on Verdi’s Rigoletto and lieder transcriptions of works by Robert Schumann. McCabe will devote the entire second half of her program to works by Liszt in recognition of the recent bicentennial of the composer’s birth.

Guest artists appearing at the School of Music during Winter Quarter present a variety of musical traditions. Internationally acclaimed clarinet and mandolin virtuoso Andy Statman presents a free klezmer music master class on January 19, concluding a ten-day residency at the School through its Ethnomusicology Visiting Artists Program. Grammy nominated bassist John Patitucci is in residence at the School February 23 to 26. His visit, made possible through the Barry Lieberman and Friends Series, will include two master classes—one for jazz musicians (February 23) and one for classical musicians (February 25) as well as a concert on Sunday, February 26 with faculty pianist Marc Seales. Other notable guests during Winter Quarter include Brazilian guitarist Odair Assad, leading a master class at the School of Music on Saturday, March 3 as part of the Seattle Classic Guitar Society International Master Class Series, hosted by guitar instructor Michael Partington. Drummer Ralph Humphrey, known for his work with rock icon Frank Zappa, appears with School of Music faculty artist Tom Collier and bassist Dan Dean on the Friday, March 2 Mallethead Series concert. Humphrey also leads a free, public master class with UW music students earlier that day. The quarter concludes with a special appearance by French bassoonist Pascal Gallois, an internationally renowned musician who will perform works by UW composition students on Friday, March 9 at Brechemin Auditorium.

An array of performances by School of Music students and student ensembles include several concerts by the University Symphony, which begins its Winter Quarter concert schedule with a January 26 program of works by School of Music composer Joël-François Durand (whose composition Athanor receives its U.S. premiere); Franz Liszt (featuring faculty pianist Craig Sheppard); and Robert Schumann. The School’s 2011 Concerto Competition Winners take center stage for the orchestra’s February 23 program, performing works by Mozart, Mendelssohn, Saint-Säens, and Strauss. The orchestra also contributes players and performance to UW Opera’s presentation of Benjamin Britten’s Albert Herring, running February 16 through 19 at the Meany Studio Theater. Finally, the orchestra joins with the combined choral forces of the Chamber Singers and University Chorale on March 9 at Meany Theater to present a program of works by Stravinsky and Bach, including Stravinsky’s ambitious and rarely performed Symphony of Psalms.

The above is a partial listing of concert events during Winter Quarter at the School of Music. For complete details of these and other events, visit the events calendar at www.music.washington.edu/events.