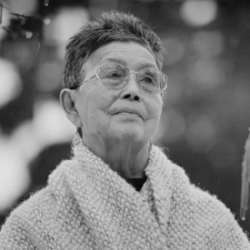 A member and noted elder of the Upper Skagit tribe who died in 2008, Vi Hilbert was instrumental in the revitalization of the language and culture of the First People of the Pacific Northwest. Her first language was Lushootseed, a Coast Salish language found in the Puget Sound region of western Washington state. Over the course of more than 40 years, she built and maintained a research archive of cultural materials and worked with other scholars to develop and publish teaching materials and stories through Lushootseed Research, an organization she founded.

In 2005, she donated her extensive research collection to the University of Washington, where she taught Lushootseed language and literature from 1972-1987. The manuscript collection is housed in the UW Libraries’ Special Collections, and the audio and video recordings reside in the UW Ethnomusicology Archives. In addition to her own recordings of local elders, the collection includes recordings made between the 1950s and 2005 by linguists, anthropologists, and other collectors of the local language and song traditions.

Voices of the First People provides on-line access to audio and video recordings from the Vi Hilbert Collection in the UW Ethnomusicology Archives and features Hilbert's work as a storyteller, teacher, and culture bearer. The site organizes video and audio recordings made between 1968 and 2008 into various categories highlighting aspects of Vi Hilbert's life and work. "We believe the site will be a useful resource for teachers, students, and anyone interested in Lushootseed language and culture," says Laurel Sercombe, Ethnomusicology Archivist.