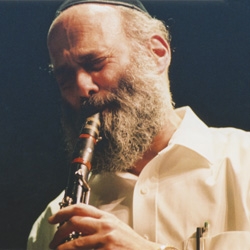 While at the School of Music, Statman also will offer an intensive five-session performance class focused on klezmer music and concepts of form and melody that can be applied to improvisation in different musical genres, says Shannon Dudley, associate professor of Ethnomusicology.

Statman was born in 1950 into a family with a long line of cantors and professional musicians.  As a teenager he immersed himself in the Greenwich Village folk music scene and studied mandolin with David Grisman, who immediately recognized the youngster’s prodigious talent. Statman went on to perform and record with some of the great folk and folk rock musicians of the 1960s, including Bob Dylan, David Bromberg, Vassar Clements, and Jerry Garcia.

Inspired by John Coltrane and the experimental jazz movement, Statman took up the saxophone and became interested in the connections between music and spirituality. This soon led him to an exploration of his Jewish musical heritage, for which he found a mentor in clarinetist Dave Tarras, one of the last living masters of an old world Jewish repertoire that had gone out of fashion. Statman became an influential figure in the revival and development of this music, which came to be known as “klezmer” in the 1970s.

Today Andy Statman’s music draws on klezmer and other Jewish styles, as well as the bluegrass and jazz music that inspired him originally. His diverse influences are apparent in his recorded work and performing, in which he plays both clarinet and mandolin, and his respect for the spiritual dimension of music is evident in everything he plays.

Statman's residency at the School of Music is co-sponsored by the Sam and Althea Stroum Jewish Studies Program at UW with additional support from Chabad Jewish Student Center.

Admission to the January 19 master class is free and open to the public. More detail is available here.