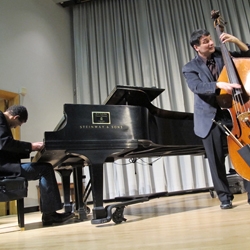 Three-time Grammy winning bassist John Patitucci is in residence at the School of Music February 23-26 through the Barry Lieberman and Friends Series.

At the forefront of the jazz world for the last 25 years and active in all styles of music, Patitucci has been nominated for Grammy Awards more than a dozen times. His latest CD, Remembrance, features saxophonist Joe Lovano and drummer Brian Blade. Both Remembrance and his 2007 release, Line by Line, were Grammy nominated in the Best Instrumental Jazz Album category.

Admission to the master classes is free and open to the public. Ticket details and more information about the February 26 concert with Marc Seales are available here.