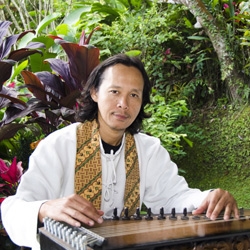 Homayoun Sakhi and Salar Nader, preservationists and innovators of the musical traditions of Afghanistan, and Ade Suparman, instrumentalist and composer of Sundanese music from West Java, are in residence at the School of Music during Spring Quarter 2012.

Born in Purwakarta, West Java, in 1969, Ade Suparman began playing kacapi when he was 10 years old and later studied music theory and classical music at Indonesia Art School. After graduating from Indonesian Art University in Surakarta, he performed as a concert kacapist around the world. In addition to his performance career, he is known for creating a new learning method for suling (bamboo flute) and has also published several method books for Sundanese instruments.

Information about the April 13 performance and more details about the artist are available here.

Homayoun Sakhi, rabāb, and Salar Nader, tabla, are in residence at the School of Music from April 23 through May 4, offering an intensive course of instruction in Afghan music that will include group sessions and individual lessons. They also are the featured performers for the School of Music’s annual Ethnomusicology Visiting Artist Concert on Tuesday, April 24, 7:30 p.m. at Meany Theater.

Homayoun Sakhi is a master of the Afghan rabāb—the double-chambered lute at the heart of Afghanistan's Pashtun klasik tradition. Born in Kabul in 1976, Sakhi was heir to one of Afghanistan's great musical dynasties. His father, Ghulam Sakhi was a student and brother-in-law of Ustad Mohammed Omar, a revered musician with a direct link to the origins of Afghan classical music.

Percussionist Salar Nader received his first tabla set from his father when he was six months old. He has performed throughout his life with renowned masters of Afghan and Indian musical traditions. His musical interests span both traditional and contemporary traditions—along with an abiding passion for Afghan classical music traditions, he also is intensely interested in Indian Kathak dance and music and enjoys collaborating with the Dj Cheb i Sabbah, a Dj for the Asian underground scene, and Fareed Haque Group, improvising on an Indian jazz fusion style of music.

Details about both artists and the April 24 concert are available here.