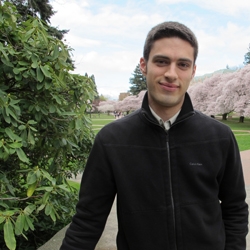 The College of Arts and Sciences has named senior Joshua Gailey the 2012 Dean’s Medalist for the University of Washington arts division in recognition of his exceptional academic achievement at UW. The award is the University’s top student honor for undergraduates. Gailey, who graduates in Spring 2012 with degrees in Trumpet Performance, Music History, and Italian Studies, will also receive a Future Timeless Award from the College in honor of his leadership potential.

Gailey comes from a musical family. His brother Justin, a senior at UW majoring in astronomy and physics, is a percussionist who has performed with the UW Percussion Ensemble and Steel Drum Band, and his parents, Douglas and Jolene Gailey, both teach music at Port Angeles High School. “They are great parents,” Gailey says, noting that he had both of his parents as teachers while in high school—his mother for choir and his father for band. “I credit them with any success I have had.”

A student of Seattle Symphony principal trumpet David Gordon, Gailey has performed as principal trumpet of the University of Washington, Port Angeles, and Puget Sound Symphony Orchestras, as a member of the UW Wind Ensemble, the Seattle Metropolitan Chamber Orchestra and the Seattle Chamber Brass Quintet, and as a soloist with the Puget Sound Symphony.

Gailey combined his love for music with his passion for Italian studies in the field of musicology, writing a senior honors thesis on "Wagnerism and Wagnerian Influences in Verdi's Otello." His faculty advisor, Stephen Rumph of the Music History program, was one of several School of Music faculty who supported Gailey’s nomination for the Dean’s Medal. “They couldn't have chosen a worthier music student,” Rumph says.

A full list of Timeless Award Winners is available here.