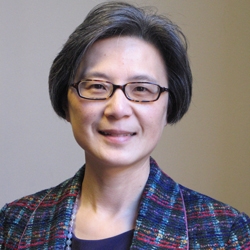 Judy Tsou, Head of the Music Library and Lecturer in Music History, has been elected president of the Society for American Music (SAM), a scholarly and educational organization that strives to stimulate the appreciation, performance, creation, and study of American musics.

A scholar whose work focuses on the intersection of music, gender, and race, Tsou has published and written numerous articles including studies of American sheet music, the opera Madama Butterfly, and women in music.

Additionally, she recently served as a contributing editor for the second edition of the New Grove Dictionary of American Music (Oxford University Press, 2012), for which she commissioned and edited more than 200 articles. She also co-edited the award-winning Cecilia Reclaimed (Univ. of Illinois Press, 1994).

As president of the U.S. Branch of the International Association of Music Libraries, Tsou successfully led the merger of the Branch with the Music Library Association (MLA) in 2011. She has held many leadership positions, chairing various American Musicological Society committees, serving on the MLA and SAM Boards, and book award committees in AMS and SAM.

During the four-year appointment with the Society for American Music, Tsou will serve as president-elect for one year before assuming the presidency in March 2013 for a two-year term.  She then serves as past president for the final year of her appointment.