Building a Better Piano: Behind the Scenes with our Piano Techs 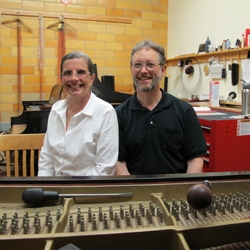 A print by Raphael is tacked to the bulletin board of the piano technicians' workshop in the basement of the Music Building. It depicts St. Cecilia, the patroness of musicians, casting her eyes to the heavens with an array of musical instruments at her feet in various states of disrepair.

"I like to think of St. Cecilia as the patron saint of broken instruments," says Susan Willanger Cady, one of two technicians who maintain the School's fleet of pianos, and who found the print in a shop in New York on one of her visits to the Steinway piano factory in Queens.

Cady and her colleague, Doug Wood, are themselves considered patron saints of a sort by the many at the School of Music and throughout Seattle who rely on their talent and expertise. Together, they maintain the School's piano inventory, which at present numbers 101 modern pianos--including 47 Steinway grands and six verticals--and about a dozen historical instruments such as harpsichords, clavichords, and forte pianos. The instruments are used by all of the school's divisions, performance-based and academic programs alike.

Though pianos may be taken for granted as just one of the many instruments in play at a music school, Cady and Wood are finely attuned to the value and importance of each instrument and the fleet as a whole. "We have something on the order of $3.5 million in piano inventory with an average age of 50 years," Wood says. "We are looking at that as capital equipment. These instruments have the same kind of lifespan and value to the university as a building. It's very different from computer keyboards that are replaced every few years."

"Our best pianos are world class," he continues. "They are exceptional instruments. Those are used in the performance venues. The faculty studio pianos are very, very good. And we have a few decent pianos for student practice rooms. But behind those it goes downhill very quickly." The average lifespan of a piano is 50 years, and many of the School's pianos are near the end of their life cycle. "The average age of our pianos is 49 years," says Wood, who knows this because he and Cady maintain a meticulous spreadsheet of the School's piano inventory. The oldest modern pianos in the School's fleet were built in the early 1900s. The three oldest pianos are Steinway uprights. The oldest grand was built in 1916.

"Pianos are not like violins," Cady says. "They don't get better with age. People sometimes think because it's old, it's better, and that's not the case. However, they can have new life breathed into them with new parts. We are steadily rebuilding better pianos." Rebuilding duties mainly fall to Wood, who spends most of his hours at the Music Building buried in the workshop, reviving instruments.

"He is a master rebuilder," Cady says. "He's a master at making a piano as good as a new one out of the factory. He understands how to make the key balance and the evenness of the keys perfect. There are probably only a handful of people in the country who can do what he does."

Cady, meanwhile, is the "boots on the ground" half of the team, addressing service needs, tuning, responding to faculty requests, and tending to the historical instruments, which can be temperamental, difficult to keep in tune, and otherwise time-consuming. "We work together well and always have," Wood says. "We have full faith and confidence in each other's work. We feel very fortunate that we can collaborate and have the same ideas of how pianos work."

The two met in 1986 when Cady was completing testing to become a registered piano technician. "When I was taking the tests to put the R.P.T. letters behind my name, Doug gave me one of the tests," Cady says. "That set off a whole chain reaction for me. It catapulted me into the world of Steinway. I went back to New York multiple times. We're both so fortunate that we were in the right place at the right time to be trained by the best Steinway technicians in the world."

Cady started work at the School of Music in the early 1990s, assisting Steve Brady, the School's former head piano technician, and was hired permanently in 1995. Wood came aboard eight years later. The current configuration of the workshop is his design. He built and organized the workbench, upgraded the inventory of tools and equipment, and set up the space--the size of a small faculty office--so that two grand pianos can be in repair at once. At the moment, there are two pianos in the shop, both of them recent donations to the School of Music. One of them is a Steinway B, formerly owned by the late pianist and composer Leonard Pennario.

"When I first saw this one, I knew right away it was special," Cady says, explaining that every piano has a distinct aura or presence. Though Pennario's Steinway, given to the School by the composer's brother, Dr. Joe Pennario, is a high-quality instrument in excellent condition, Wood and Cady will give it some special attention to prepare it for use in a school setting.

"When we receive a piano donation, we go through it very carefully to make sure it is set up for the purpose of the School," Wood says. "We go through it with certain things in mind." For one thing, the piano will receive heavy use in a school setting. "A typical piano might receive seven to ten hours per week of home use," Wood says, "but in a school setting, it may be more like 70 to 100 hours of use per week." With heavy use comes the necessity of constant attention to all of the pianos in the school's inventory. With heavy use, for instance, strings tend to break. Wood puts it into perspective: "There are 230 strings on a piano. With one hundred pianos, that's 23,000 strings. We pop a dozen or two per year."

A string can take ten minutes to change, "if you're lucky," Cady says. "Or if you're not lucky, it can take a half hour or longer. It usually means cut fingers for me."

In this and many other ways, the work of a piano technician is physically demanding. Besides the perils of heavy lifting, occupational hazards can include tight shoulder muscles from long hours bent over the piano works, and a range of other injuries. "But we're both happy as clams," Cady says. "Tuning must be some sort of meditation because it tends to clean out the cobwebs in my head. Unless I tune too many; then my IQ drops precipitously from mental fatigue."

"The nature of piano service is that to do well you have to be personally invested," Wood says. And not everyone is cut out for the work, or good at it. "It's a calling."

Cady concurs. "Passion is required if you're going to be good at it. For me, it has always been all consuming. I feel like a part of me is in this place," she says, looking around the workshop. "It'll feel weird when I retire someday and have to turn in my keys. I'll feel like I'm leaving behind a chunk of myself." Indeed, the entire fleet of pianos bears the mark of these two dedicated professionals. He could easily be talking about himself and his colleague when Wood says, "Not everyone can understand the profound nature of the musical experience, but those who do are a blessing to this world."