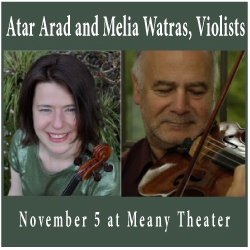 Violas and viola masters are in the spotlight November 4 and 5 when renowned violist Atar Arad, professor at Indiana University, leads a master class with UW music students and performs a recital with his former student, Associate Professor Melia Watras.

Arad leads a free master class with UW music students and young Seattle musicians  at noon on Sunday, Nov. 4 at Brechemin Auditorium. His visit to Seattle is hosted by his colleague and former student, Associate Professor of Viola Melia Watras.

On Monday, 7:30 pm at Meany Theater, the two musicians perform a joint recital of original compositions and works by Schubert and Clarke, joined by pianist Kimberly Russ of the Seattle Symphony.

Arad's career has taken him to major concert halls and stages around the world and won him wide acclaim as a recording artist and prize-winning performer. He currently serves as Professor of Music (viola) at the Jacobs School of Music, Indiana University, Bloomington. In the summers he teaches at the Steans Institute for Young Artists (Ravinia Festival) in Chicago, Domaine Forget Academy of the Art and in Keshet Eilon Music Center, Israel.

Watras, chair of the Strings Division at UW, has distinguished herself as one of her instrument's leading voices: as a soloist, recording artist, and cofounder of the acclaimed Corigliano Quartet. An accomplished and adventurous performer of new music, she has championed the works of living composers throughout her career. She has commissioned, premiered and recorded numerous new compositions, while appearing onstage at prestigious venues such as Carnegie Hall, Weill Recital Hall, and Alice Tully Hall.

Program details and ticket information about the Nov. 5 recital are available here.