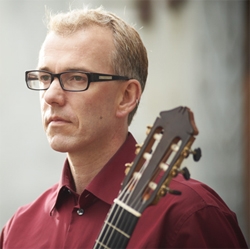 Praised by Classical Guitar Magazine for his "lyricism, intensity and clear technical command," Partington has performed internationally as a soloist and with ensembles to critical praise. He began playing guitar at age six while growing up in Wales, gave his first public performance at age seven, and won his first competition at age nine. He has trained with many of the world's greatest guitarists, including Oscar Ghiglia, Eliot Fisk, Eduardo Fernandez, Manuel Barrueco, and David Russell, who commented on his "exquisite good taste and fluid perfection." Partington received a performance degree from the University of Washington School of Music, where he was a Brechemin scholar and graduated magna cum laude.

Details on the Nov. 11 master class are available here.