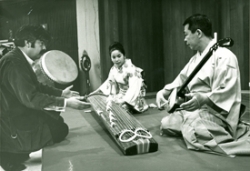 Robert Garfias, left, founded the Ethnomusicology program at the UW in 1962

From its beginnings in 1962, the Ethnomusicology program at the UW has made an important impact on the musical culture of the Pacific Northwest and has sent generations of scholars into the field to collect and document the music of the world’s people. Additionally, the program—one of the country’s oldest and most notable—has hosted upwards of 100 musicians and scholars from around the globe for residencies ranging in length from a few days to a few years.

As it passes the half-century mark, Ethnomusicology at the UW remains an important aspect of the School of Music’s academic offerings. In 2012-13, the School implements a new undergraduate degree program in Ethnomusicology, a major expansion of a program that formerly offered only graduate degree studies. A gamelan and a marimba ensemble will be welcome new additions to the program's instrument collection and will enhance students' study of music cultures of Indonesia and southern Africa.

While budget reductions in recent years at the UW have altered the extent of the Visiting Artists Program, the School has worked diligently to continue the tradition of hosting notable artists from throughout the world. In addition to appealing to friends and alumni for increased private support for the Visiting Artists program, the School has implemented quarter-long (rather than year-long) residencies. That trend continues in 2012-13, when Ethnomusicology will sponsor residencies by Wagago musician Kedmon Mapana of Tanzania, Senegalese percussionist Thione Diope, and Hindustani vocalist Srivani Jade. All three artists will offer classes with UW students in addition to public performances and demonstrations.

Indeed, there is much to celebrate as this venerable UW program celebrates 50 years of “bringing the world to Seattle.” Anniversary events include several visiting artist concerts and a 50th Anniversary Weekend of Ethnomusicology February 8-10, 2013, with panels, performances, and social events for alumni, friends, and former and current faculty of the program. “The Ethnomusicology program is notable for its pioneering efforts in the scholarly study of music and culture,” says Patricia Campbell, chair of the program. “We are eager to celebrate the fine work of the scholars associated with the program over the past 50 years.”

Save the dates for 50th Anniversary Special Events:

Program details and other anniversary activities will be posted to www.music.washington.edu as
arrangements are finalized. Please check back frequently for the latest updates.