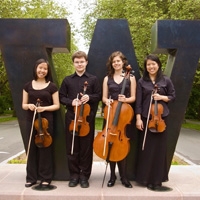 The Oceana Quartet, winners of the School of Music’s third annual Chamber Music Competition, recently won first place in the strings division at the state level of the Music Teachers National Association (MTNA) chamber music competition. Their placement qualifies them to advance to the Northwest regional competition in January 2013. Regional winners from across the country will compete for monetary awards at the MTNA National Conference in Anaheim, California in March 2013.

Coached by violist Melia Watras, chair of the UW’s Strings program, the Quartet was formed in winter 2011 by violinists Emily Choi and Rochelle Nguyen, violist Romaric Pokorny, and cellist Sonja Myklebust. Their performance schedule has included numerous public and private appearances at the UW and beyond, including performances at Brechemin Auditorium, Daniels Recital Hall in downtown Seattle, and an appearance for Paramount Pictures for the 100th anniversary of the maiden voyage of the Titanic.

In spring of 2012, the quartet was nominated by the UW School of Music to perform at HuskyFest, a school-wide event celebrating the university’s150th birthday. The group has two upcoming concerts at the UW in the 2012-13 school year—Sunday, December 2, 4:30 p.m. and Saturday, May 11, 7:30 p.m., at Brechemin Auditorium.