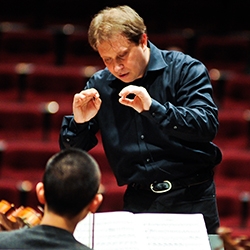 A longtime partnership between the University of Washington School of Music and Seattle Symphony gains significant momentum with the recent appointment of SSO Music Director Ludovic Morlot to oversee the UW’s orchestral conducting program.

As Chair of Orchestral Conducting Studies at the School of Music, Morlot will take the lead role in shaping the training and recruitment of graduate conducting students starting in Fall 2013. Morlot’s new position as a member of the School of Music faculty comes one year after his March 2012 appointment as Affiliate Professor of Music at the UW.

“This is a transformational moment for the School of Music and for music in the entire region,” says Richard Karpen, director of the School of Music, who added that Morlot’s focus will be to recruit very gifted graduate conducting students to the UW from around the world and to work closely with them during their residency at the School of Music.

Since assuming the directorship of Seattle Symphony in 2011, Morlot has been credited with re-invigorating the organization and introducing adventurous programming and numerous collaborations with regional artists and arts organizations.

His local activities, however, have not diminished his reach and influence in the international music community, as demonstrated in January 2012, when—in tandem with his leadership of the Seattle Symphony—he assumed a post as Chief Conductor of La Monnaie in Brussels, one of the most prestigious opera houses in Europe.

Another newcomer to the School of Music, David Rahbee, will work closely with Morlot to develop a top-notch program in orchestral studies. Rahbee has accepted an initial one-year appointment as Director of the University of Washington Symphony Orchestra, effective Fall Quarter 2013.

At the University of Washington, Morlot made his first public appearance as an Affiliate Professor of Music in February 2013, conducting the UW Symphony in a deeply moving performance of Ravel’s Daphnis et Chloe, Suite No. 2. Morlot’s work with the students included several inspirational rehearsals with the orchestra, which gave students a first-hand experience with the high expectations and expressive leadership style of the French-born conductor.

"I'm thrilled to be part of this initiative that strengthens the ties between the Seattle Symphony and the University of Washington,” Morlot says of his new appointment at the School of Music. “At its best, education is a never-ending journey of mutual enrichment and discovery. One never stops learning, and the students' energy, passion and curiosity inspire and engage me, allowing me to grow as I share my knowledge with them. I am honored that Richard Karpen and UW President Michael Young have entrusted me with this responsibility, which I take very seriously. I admire their shared passion for excellence."