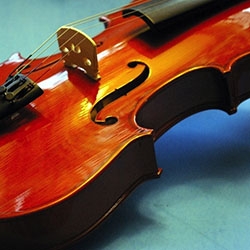 The reading session — which is free and open to the public — will be led by Seattle Symphony Assistant Conductor Stilian Kirov and will feature two compositions by UW doctoral students: Douglas Niemela’s African Bagatelles and Jeff Bowen’s Stalasso.

The session will be followed by a post-performance panel discussion: “Demystifying the Process: New Works and Artistic Programming.”

The panel will be moderated by Seattle Symphony Vice President of Education and Community Engagement Kelly Dylla, and will include Richard Karpen, director of the School of Music; Janice Giteck, professor of composition at Cornish College of the Arts; Elena Dubinets, Seattle Symphony vice president of artistic planning, and Stilian Kirov.

The three movements of Stalasso present three "readings" of a single musical object--a transcription of a short guitar improvisation that serves as the source material for the piece. Each reading elaborates different elements of this improvisation, while the guitar enters the musical texture at certain points with fragments of the original material.

African Bagatelles are derived out of Banda Linda and Banda Dakpa music theory of Central Africa.  In 1963, French-Israeli ethnomusicologist Simha Aron discovered the polyphonic ensembles of Central Africa’s Banda Linda tribe.  The Linda represent one of the main branches of the Banda, an ethnic group with a well developed sense of musical structure.  Notable were the large horn ensembles, where dense polyphony is created by way of complex polyrhythmic structure.  In the late 1970's and 80s, Gyorgi Ligeti and Luciano Berio came to recognize the significance of this music and Simha's work, with Ligeti writing the “forward” in Simha's published study.

From this much-favored foundation, these pieces use an altered and deepened layering scheme to mask and reveal areas of structural detail.  Texture is hinted at through the interweaving of accents, tone colors and/or attacks of the simultaneously performed figures.

Jeff Bowen: Jeff Bowen is a composer and guitarist from St. Louis, Missouri. Jeff received his BA in Music from Stanford University, where he studied composition with Jaroslaw Kapuscinski and Mark Applebaum, and classical guitar performance with Charles Ferguson. His compositions have been performed by Pascal Gallois, Beta Collide, the American Creators' Ensemble, and the UW Modern Music Ensemble, among others. Jeff is currently pursuing a DMA in composition at the University of Washington under Joël-François Durand.

Doug Niemela: Douglas Niemela is a doctoral student in music composition at the University of Washington, where he studies with Juan Pampin and Richard Karpen. He earned his B.A. at the University of Maryland in College Park, Maryland, and completed Bass/Arranging studies with Bruce Gertz and Dick Lowell at the Berklee College of Music in Boston, Massachusetts. His composition interests include surround sound composition, African music, and hybrid acoustic electronic composition. He has composed for live theater, dance, and various ensembles, with performances of his works in Washington DC, Boston, San Francisco, and Seattle.

In 2010 Kirov was awarded the Chautauqua Music Festival's David Effron Conducting Fellowship, and he returns in 2012 as a guest conductor at the festival. In 2011 Kirov made his debut at the Musical Olympus International Festival in St. Petersburg, Russia. The members of the Festival's honorary committee included several of the world's most distinguished artists, including Claudio Abbado, Daniel Barenboim, Placido Domingo, Montserrat Caballe, Zubin Mehta, Yuri Temirkanov, Mariss Jansons and Yo-Yo Ma. During the 2012-2013 season, Kirov will also appear twice with the Amarillo Symphony.

Among Kirov’s numerous awards and prizes are the Orchestra Preference Award and Third Prize at the 2010 Mitropoulos Conducting Competition, the Bruno Walter Memorial Scholarship and Charles Schiff Conducting Award for outstanding achievement at The Juilliard School, as well as France’s 2010 ADAMI Conducting Prize, which culminated in a showcase concert at the Salle Gaveau with Orchestre Colonne in October 2010. Following the successful performance, Kirov was re-invited to conduct the orchestra’s 2011-2012 season opening concert in Paris.

Kirov earned a degree in Orchestral Conducting from The Juilliard School, where he was a student of James DePreist. He also holds a master's degree from the Ecole Normale de Musique in Paris, where he studied with Dominique Rouits. Kirov has participated in master classes with such distinguished conductors as Kurt Masur, Michael Tilson Thomas, Gianluigi Gelmetti, George Manahan and Asher Fisch.

A gifted pianist, Kirov is the 2001 gold medalist of the Claude Kahn International Piano Competition in Paris.