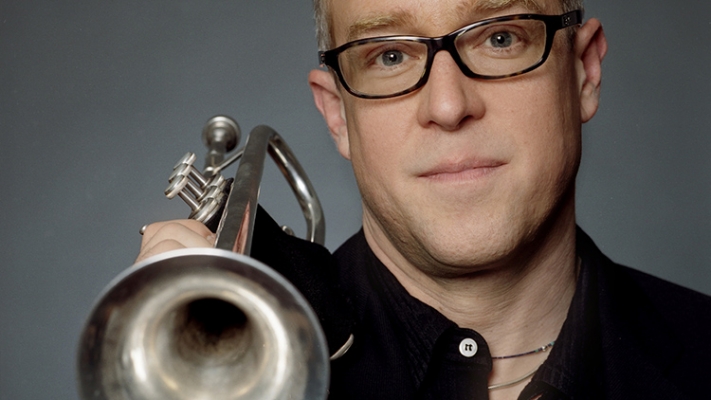 Area jazz fans will have two opportunities to hear from acclaimed trumpeter Dave Douglas, in town this week for a performance with UW Jazz Studies students and faculty Saturday, Nov. 9 at the Jones Playhouse. The concert, a presenation of the School of Music and Earshot Jazz, gets under way at 7:30 p.m. and will include an opening set by UW Jazz Studies students as well as Douglas's set with the Cuong Vu Trio (Cuong Vu, trumpet; Ted Poor, drums, and UW student Carmen Rothwell on bass).

In addition, the School of Music presents a free Meet the Artist session with the trumpeter, 12:30 to 1 p.m. on Friday, Nov. 8 at the Jones Playhouse. The sesion is open to the public.

A two-time Grammy-nominee, Douglas is considered to be one of the most prolific and original trumpeter/composers of his generation. From his New York base, where he's lived since the mid 1980s, Douglas continues to earn lavish national and international acclaim for his playing and composing by such organizations as the New York Jazz Awards, Down Beat, Jazz Times, Jazziz, and the Italian Jazz Critics' Society.

His solo recording career began in 1993 with Parallel Worlds on Soul Note and he has since released over twenty-eight recordings. In 2005, after seven critically-acclaimed albums for Bluebird/RCA, Douglas launched his own record label, Greenleaf Music. The same year, he was honored with a Guggenheim Fellowship. On Greenleaf, Douglas has released albums with his long standing Quintet, the electronic sextet Keystone, and the mixed chamber ensemble Nomad. His latest project, Brass Ecstasy, features a brass quintet of trumpet, french horn, trombone, tuba and drums and will release Spring 2009.

Douglas is currently the artistic director of the Workshop in Jazz and Creative Music at the Banff Center and the co-founder and director of the Festival of New Trumpet Music, which will celebrate its 7th year in 2009. In addition to leading his own groups, Douglas has an important ongoing musical relationship as a member of John Zorn's Masada and with artists such as Anthony Braxton, Don Byron, Joe Lovano, Miguel Zenon, Uri Caine, Bill Frisell, Cibo Matto, Mark Dresser, Han Bennink and Misha Mengelberg. As a composer, Douglas has been commissioned by the Trisha Brown Dance Company, Birmingham Contemporary Music Group, Norddeutscher Rundfunk, Essen Philharmonie, Library of Congress and Stanford University. Recent large scale works have included Blue Latitudes, for chamber orchestra and 3 improvisers, and Delighted States, for big band with soloists.

Tickets are still available for the Nov. 9 concert. Details are available here.