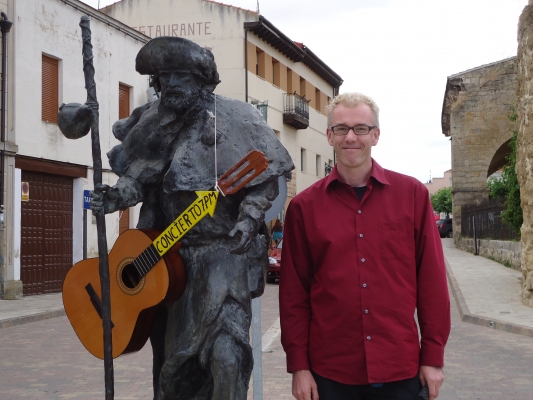 A glance at the concert calendar of guitarist Michael Partington reveals upcoming dates at colleges, universities and performance halls throughout the United States, with tour stops in Idaho, Oregon, eastern Washington, Ohio, Wisconsin, and Hattiesburg, Mississippi, as well as several spring dates in the U.K.  But it's fair to say he might be most excited about a residency on the calendar for next June and July in the Spanish community of Carrión de los Condes, because it will mark his return to a region of the world that has affected him profoundly.

Long appreciative of the Spanish classical guitar music that he first heard as a young boy growing up in Wales, Partington had a special opportunity to revisit the repertoire last summer in its country of origin, performing a series of concerts to audiences composed of travelers of the Caminos de Santiago (The Way of St. James), a network of pilgrimage routes used continuously for the past thousand years by travelers intent on reaching Santiago de Compostela in northern Spain, the reputed final resting place of the apostle James.

Partington’s concerts in cathedrals along the center of the French route of the Camino were sponsored by a small grassroots organization, Camino Artes, devoted to bringing cultural enrichment to pilgrims of the Way. Created by luthier and Camino pilgrim Federico Sheppard and supported by the town of Carrión de los Condes, the program began providing free guitar concerts to pilgrims in cathedrals along the Camino in 2010, providing housing for artists so they can reside in town during their summer concerts series.

For Partington, the experience represented his own first steps toward a transversal of the Camino, an idea that had been taking hold with him for some time.

“I had been fascinated by it for several years,” Partington told radio host Sean Maclean last December in an interview on KING FM. “I very much would like to walk it, and this experience of being there and seeing it, and meeting the pilgrims was both inspiring and intimidating. It was very moving.”

The impact of his time in Spain has reinvigorated the guitarist’s interest in the Spanish classical guitar repertoire, resulting in his new release on the Rosewood guitar label, Por Caminos de Santiago, an homage to the Camino presenting works by Albéniz, Falla, Llobet, Rodrigo, Tórroba, and Turina.

As far as his next steps toward a return to the Camino, it is said that the journeys of pilgrims on the Camino vary in length, because all of their journeys begin at their own doorsteps. If that is so, Michael Partington is already on the Way.