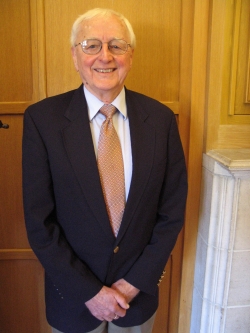 The passage of beloved School of Music advisory board member and alumnus Don Thulean in early April is a great loss to the School and the region. A tireless advocate for the arts, Don possessed a powerful gift for bringing collaborators together in the service of great music. We extend condolences to his loved ones and dedicate our April 24, 2015 UW Symphony and Seattle Symphony Side by Side Concert to his memory.

Donald Thulean was born June 24, 1929 in Wenatchee and died in Seattle on April 9, 2015 shortly after a stroke.  This significant figure in American orchestral music studied conducting at the University of Washington where he received B.A. and M.A. degrees.

After stints as Dean of Music at Pacific University in Oregon and Dean of Students and Chorus Master at the Aspen Music Festival, as well as conducting the Portland Junior Symphony and Portland Symphony, in 1962 he became the second music director in the history of the Spokane Symphony.

Hired with a mandate to transform a community orchestra into a major regional music provider, he did just that in many ways.  He initiated a series of personnel changes, hiring advanced musicians to come to Spokane to make the Symphony a core of a livelihood.  He increased the musicians compensation and the orchestra’s mission by beginning a series of educational concerts, supported by the Washington State Cultural Enrichment Program and U.S government Title IX funds. In this effort the Spokane Symphony played for essentially every middle school and high school student in Washington east of the Cascades over a ten year period. This touring and community engagement included performances and workshops with orchestras in Washington, Idaho, and Montana. Mr. Thulean brought his orchestra to a level appropriate to host a world’s fair, moving into a concert hall created for that event, and performing with the major artists of the time.

In 1984 he left the Spokane Symphony as Conductor Emeritis to become the Vice President for Artistic Affairs of the American Symphony Orchestra League.  In this capacity he specialized in services to the art of conducting, with both conductor development workshops and better methods of conductor selection. He has had a significant impact on a generation of conductors of American orchestras.

In recent years he returned to Seattle, where he immersed himself in orchestral affairs there.  A member of the board of directors of both the Seattle Symphony and Seattle Youth Symphony, he brought his considerable wisdom and experience to bear for both organizations, in some cases advocating for difficult but important decisions.

Donald Thulean will be remembered in several ways.  Friday, April 17 friends from Spokane will gather at 5:00 in the Kress Gallery at River Park Square.  There will be a memorial service in Seattle ­­­­­­­­­­­­­­­­­at a later date. The Spokane Symphony will pay tribute to him in their concerts of April 18 and 19.  On Friday, April 24 he will be remembered in a combined concert by the Seattle Symphony and University of Washington Symphony Orchestra at Meany Hall on the UW Campus, a collaborative event he had long advocated and which had come to fruition before his death.

In every stage of Donald Thulean’s life and career he was a powerful and eloquent advocate for the power and meaning of music in people’s lives.  This legacy along with his deep humanity and humility made him a beloved friend to all whom he touched.

“Part of why the Spokane Symphony is what it is today is because Don Thulean knew what a good Symphony was, and he wanted that for Spokane. Following his tenure here as Music Director, he worked at the League of American Orchestras, playing an important role in the growth of orchestras nationwide. Most recently, he’s had a significant impact on the arts sector in Seattle. He was great man, and it is a great loss for his family, the Symphony family and the arts world.”