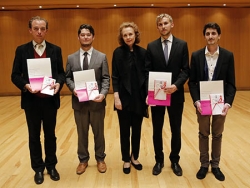 University of Washington doctoral composition graduate Yiğit Kolat claimed one of the world’s top honors for young composers May 31 in Tokyo when he was named a top prizewinner in the Toru Takemitsu Composition competition.

Kolat was among four finalists whose works were performed by the Tokyo Philharmonic Orchestra in the finale of the annual competition, hosted by the Tokyo Opera City Cultural Foundation in memory of its late artistic director, Toru Takemitsu.

In keeping with the tradition of the award, the winners were chosen by a single judge—in this case, Finnish composer Kaija Saariaho—who declared that the cash prize of three million yen be divided equally between all four finalists. She named two first-prize winners—Kolat and Finnish composer Sebastian Hill, and two second-prize winners—Thomas Wally (Austria) and Fabià Santcovsky (Spain).

In her judge’s comments, Saariaho wrote that Kolat's work [difeʁãs] impressed her with its "unusual and daring format and musical conception."

"This piece is notated in great detail to express the composer's ideas,” she wrote, “and it advances in graphic gestures rather than measured music, even if the time is carefully notated.”

“What I gained from the Takemitsu Competition is beyond an award,” Kolat shared with family and friends on social media following the award presentation. “I got the chance to work with a highest-tier orchestra like the Tokyo Philharmonic, got to meet with extremely talented colleagues like Fabià, Sebastian, and Thomas, became familiar with their artistic thinking, met with Kaija Saariaho and learned her thoughts on my music—all these taught me a lot in these several days …. Awards like Takemitsu Award are important because they provide the opportunities I mentioned above. The rest of it (who became first, second, etc.) is just a petty formality. I believe that the most rational approach to competitions would be to consider them as opportunities to refine one's musical language. Focus should always be on the artistic improvement the experience brings, rather than the competition results.”