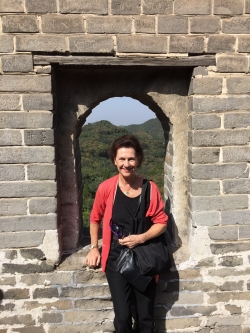 Robin McCabe, piano, recently returned from a series of dates in China, where she was an invited performer to the 9th International Beijing Festival for Piano. The head of the UW’s piano program performed solo recitals and led master classes at the China Conservatory, China National Conservatory, and Capitol Normal University, Beijing.

McCabe’s UW colleague, pianist Craig Sheppard, continues his exploration of the 24 Preludes and Fugues, Opus 87, of Dmitri Shostakovich with a series of recitals devoted to the works. Sheppard gave performances in Houston (Rice), the San Francisco Conservatory, Oberlin College, the Shanghai Conservatory, and the Forbidden City Concert Hall in Beijing, as well as at the UW’s Meany Theater last April. The CDs from the UW concert are due for release this fall on Romeo Records.

Melia Watras, viola, marks the release of her Sono Luminus label debut, Ispirare with an Oct. 29 celebration at the School of Music. The Virginia-based Sono Luminus label, specializing in ultra-high-resolution recordings of acoustic music, is set to release an additional disc from the violist in October 2016. Ispirare includes works by George Rochberg, Atar Arad, Luciano Berio, and a solo viola work by Shulamit Ran, composed for Watras. More detail about the CD release celebration is here.

Michael Brockman, saxophone, recently celebrated the close of the 20th Anniversary Season of the Seattle Repertory Jazz Orchestra with a pair of concerts titled "Charles Mingus: Let My Children Hear Music," held at Benaroya Hall and the Kirkland Performance Center. Brockman is the co-founder and co-artistic director of the SRJO with drummer Clarence Acox. In July, he attended the World Saxophone Congress in Strasbourg to demonstrate his patented invention, the Broctave Key, a tuning device in production for future market release.