Judy Tsou appointed to Library of Congress Preservation Board 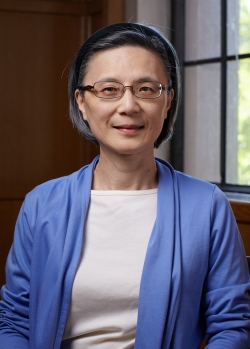 UW Music Librarian Judy Tsou (Photo: Steve Korn)
Music Librarian Judy Tsou has been appointed to a five-­year term on the National Recording Preservation Board (NRPB) of the Library of Congress. An advisory group mandated by the National Recording Preservation Act of 2000 and appointed by the Librarian of Congress, the NRPB includes representatives from professional organizations and expert individuals concerned with the preservation of recorded sound. Its members include composers, musicians, musicologists, librarians, archivists, and members of the recording industry, as well as several “at­ large” members.
Tsou makes a valuable contribution to the board’s makeup. In addition to her longtime career as a librarian, she also is a musicologist and serves as affiliate professor in the UW’s Music History program. Under her leadership, the Music Libarary has made great strides toward keeping pace with technological advances in the preservation of its audio holdings.
As a member of the NRPB, Tsou will help to make recommendations to the Librarian of Congress regarding which 25 recordings should be added annually to the National Registry to be preserved forever at the Library of Congress. The board also sets guidelines for sound recording preservation.
The Board, the National Registry, and a related fund­raising Foundation were all established by the 2000 legislation as a means to establish a comprehensive national program ensuring the survival, conservation, and increased public availability of America’s sound recording heritage.
People Involved:
Judy Tsou
Related Areas of Study:
Music History
News Category:
Information for
Prospective
Students
Information for
Current
Students