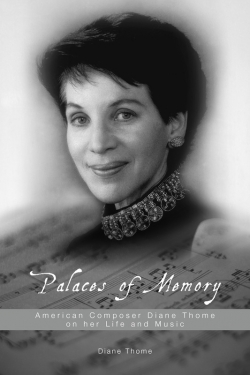 The fascinating life of pioneering composer Diane Thome gets a most personal treatment in a recently published memoir by the UW professor emerita, the first woman to graduate Princeton University with a PhD in music.

In Palaces of Memory: American Composer Diane Thome on her Life and Music (Friesen Press), Thome recounts the obstacles and opportunities she encountered as a path-breaking female composer in the realm of computer-synthesized music.

Thome, former chair of the composition program who served on the School of Music faculty from 1977 to 2006, was a bright and musically precocious child who declared her intention to become a composer at the age of eight. She began her studies in composing at age twelve with teacher Robert Strassburg and cites his influence, along with that of her own supportive mother, as key to her early creative development. Influential teachers including Dorothy Taubman, Milton Babbitt, Roy Harris, Alexander Boscovich, and Darius Milhaud made a deep impact on her as she earned a series of music degrees at the University of Pennsylvania, Eastman School of Music, and Princeton.

Thome set herself apart early in her academic career at Eastman by mastering the performance of complex piano compositions by Schoenberg, Stravinsky, and Mussorgsky, a feat that earned her the institution’s prestigious Performer's Certificate in Piano and stimulated her interest in exploring challenging repertoire. She forged ahead with a curiosity that led her into uncharted musical territory. At Princeton, she found herself a pioneer in the burgeoning field of computer music at a time when only Princeton and Stanford among American universities offered studies in the field.

In her professional life as a composer and professor, Thome faced chauvinism, conservative musical culture, and life-altering health challenges, but found the affirmative counterbalance in transformative teachers, colleagues, friends, partners, and others who introduced her to intriguing repertoire and new ways of thinking and being. In the process, she ultimately discovered her own distinctive artistic voice, with poetry, nature, and the mystical realms providing a wellspring of inspiration, and electronic and digital tools a palette of sonic opportunity.

Diane Thome discusses her memoir and her life in a conversation with School of Music director Richard Karpen Tuesday, Sept. 27, 7 at Folio: The Seattle Athenaeum, a new membership library and culture center recently opened in downtown Seattle. Attendees will also hear an excerpt of a Thome composition.  Details are at www.folioseattle.org.