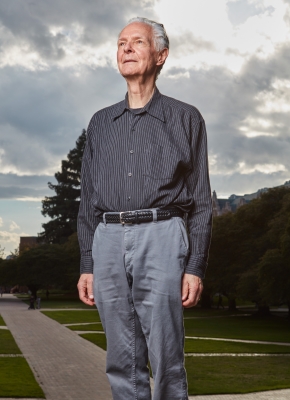 When I was 14 I had been playing baritone for about three years (they had too many trumpet players). It was just about this time I found myself in senior band (El Cerrito High was a junior-senior high school at that time) getting ready to play in a band concert only to discover that my stand-mate was ill and wasn't going to make it to the concert  - and the music wasn't going to make it either! I told the director, "Don't worry, I think I have all the music memorized." The result was fine and it gave me confidence to memorize music later on.

The trombone is an instrument that "found" me.  My then band director suggested that I take lessons but that, "You won't be able to get lessons on baritone; how about you try trombone." I said, "OK." Then I took the instrument home and taught myself how to navigate on it because transferring the basics from baritone to trombone wasn't all that difficult. After a few months I started lessons on trombone and, well, never recovered!

If I could do it all over again, I’d probably do it all over again! This is due to so many things falling into place in such positive ways. As a college student I went to school with many Korean War vets. The few of us younger students benefited greatly from the experience these vets brought with them; they were mostly about five years older than we were. After I graduated I was soon drafted into the Army where I was very fortunate to end up in Europe in the 7th Army Symphony. Besides playing many concerts in Germany, France, and Italy I gained valuable orchestral experience playing bass trombone. In particular, during most of my time there, the principal player was Porter Poindexter, an extraordinary Eastman graduate having studied with well-known trombonist Emory Remington. Porter was so well-schooled in orchestra playing that he led our trombone section masterfully and I learned much from him that proved valuable during my own four seasons as principal trombone in the Oakland Symphony during the 1960s. That placed me in the Bay Area precisely at the magical time of the development of the San Francisco Tape Music Center and so many other related new music activities and scenes that I became a part of. Playing in the premiere of Terry Riley's "In C" in 1964 was an amazing springboard for so much, including encouraging me to mount the piece in Buffalo a few years later. I had by then became a Creative Associate under Lukas Foss at SUNY Buffalo, and that made possible the infamous Columbia (Sony) recording of that piece. The very next season (beginning autumn 1968) I joined the UW School of Music faculty, and that included playing in the Contemporary Group.

My parents were surprisingly supportive of my being in music considering that my dad, besides worrying about me wanting to make a career in music, wanted me to be a scientist like he was. In recent decades, however, I have noticed how much "science" is in me. I am reasonably analytical in most of what I do, and that ability has come to light in my more and more intense interest in and study of climate change.

In the big scheme of things, what really matters is such world issues as environmental degradation and climate change. "We are in the middle of witnessing our own self-caused extinction." as Elizabeth Kolbert writes in her deep and profound book, "The Sixth Extinction: An Unnatural History" (2014). This book and others have occupied much of my mental space over the last few years. It became especially prominent when i found myself preparing for delivering a keynote "StuArt of Listening: A Planetary Pleanote" at Deep Listening Art/Science Conference at Rensselaer Polytechnic Institute in July 2014. My environmental roots go back to my maternal grandfather who knew John Muir...

Discipline is crucial if one is to acquire the necessary tools during the now infamous 10,000 hours of practice essential for success. Attention to detail is so important, and it is not helpful to play a passage 7 or 17 times and finally achieve it on the 8th or 18th time only to immediately move on to something else. The passage needs to be repeated 7 or 8, or 17 or 18 more times - all of them correctly - in order to undo all the error-prone times. And then build up a more solid body memory by playing the passage correctly yet another similar quantity of times. It is always about the percentages. It is important to play a passage correctly a minimum of 70% to 90% of the time, gradually becoming closer to $100%.

When I’m playing well, it feels like I am on another plane. This is particularly true in my performances in the Fort Worden Cistern with its elegant 45 second reverberation. It feels like one is supported by an enthusiastic audience returning the energy they have just received. It can happen with an actual audience too, of course, but that situation does seem more capricious. The cistern, however, is very giving but it is not at all Forgiving. One learns this latter when tonal center and intonation missteps occur! When I am playing well, should I happen to dwell on that even for a moment, it can send me into a bit of a downward spiral. Most performers experience this at some point and learn to set that thought aside before things get out of hand.

If I could have made a career on another instrument, it would have been the harp? organ? cello? In college I was a music ed major for a time and took most of the instrument "techniques" classes. At the time I was somewhat of a Hindemithian; Hindemith was a composer who played nearly every instrument and I was intrigued with that. Consequently, when San Francisco State began a harp program they were short of students so I signed up and learned a lot (easy Salzedo pieces, for instance). Same with organ a bit later. I went to a lot of organ recitals and eventually learned some of the easier Bach and Vierne pieces. I lasted about two years at each of those instruments. All that hands-on instrument experience was great for my composing at the time. I even learned how to change skin drum heads, timpani especially. Even now I think of Seattle Symphony's Michael Crusoe who played skin timpani heads longer than anyone I know. Very nearly a lost art, I so appreciated the sound of skin timpani heads when Mr. Crusoe played them. I might have made it as a percussion player I suppose. I do love various gongs, Tibetan and otherwise, as well as bells and small cymbals of all stripes. That and brake drums and other possibilities appearing during the 1930s-40s era of John Cage, Henry Cowell, Lou Harrison, and various others.

Your audience is your friend if you will but allow them in. One needs to trust the audience and, the more one plays To the audience, the more they will subtly communicate back. It is a wonderful feedback loop that can keep at bay tendencies toward fear, nervousness and/or stage fright. It is well to solicit the audience's complicity in this process, but that need not be accomplished through words. It can happen by your facial expressions, your aura or persona, or the act of "directing" your performance energy - a restorative energy - to the audience simultaneously as you play. In all my performances over the years I have never had an audience wishing me to fail. Indeed, it is the opposite; they will be inwardly if not outwardly cheering me on because they know that may help create a good, rich experience.

Being a musician has meant that I could be an agent of change, although I didn't know that during college and my earlier career. Change came about accidentally when I both dipped my toes into composing and, more significantly, decided to commission works from several composers that I had come to know and play for. I felt at the time, because the trombone solo literature was so limited and not very interesting, that I could actually influence solo music for trombone through commissions. The first composers I commissioned were Luciano Berio, Robert Erickson, and Pauline Oliveros for my 1966 recital at The San Francisco Tape Music Center (then at 321 Divissdero). A year later I had newly commissioned pieces from Barney Childs, Andrew Imbrie, and Ernst Krenek, Various other pieces followed from Neely Bruce, Donald Erb, Ben Johnston, Ed London, Robert Moran, Robert Suderburg, William O. Smith, and others.

The future of jazz is a good idea! Now that jazz programs are in university settings, does that mean jazz is dead? Fortunately, jazz remains alive and has branched out in many ways. In recent times such genres as free jazz gave me a window into finding my way back into performing with jazz players. I have to say also that Marc Seales was an amazing catalyst in moving me back toward jazz especially with him pulling out the more exotic Duke Ellington tunes for me to discover and digest. I never considered myself a good jazz player, but those late Ellington pieces certainly gave me a window as to possibilities. That, and the emergence of free jazz allowed my classical music improvising to merge and/or crossover into free jazz. Free jazz and free improv are very similar genres and yet are able to crossover beautifully. When I received a surprisingly positive review in, of all places, DownBeat for my "In the Abbey of Clement VI" recording I was deeply moved and somewhat shocked. Me - in DownBeat?

A sense of humor is important because it is such a wonderful way to live life. I can't imagine life without it. There are so many things in the world that can make me sad, but then I ask the question, "Is being sad going to help?" Likely not. Maybe humor is a bit too much for many topics but certainly a positive attitude helps possibilities emerge. For a time I went into mild depression with regard to the results of environmental degradation and, especially, climate change. As I study the latter my wife and I have found actions to take to directly address the situation with certain alterations and improvements to our living space. Reading and study continues...

The difference between playing and composing is minmal, at least in my improvising. Improvising is real-time composition; they happen together. There are a certain few people that it feels like we instantly know ahead of time, without any verbal communication, what the other is going to do. I cite in particular Pauline Oliveros, Marc Seales, and William O. Smith. As composer Robert Erickson put it to me one time, "Improvising is best when performers get into each other's pockets."

The history of jazz is of great interest to me. My high school band director was a bit ahead of his time in having an after-school jazz band and I enjoyed that a lot. In addition, I formed a five-piece "dixieland" band with other students and, during one year, we were accepted to play at a contest of sorts. The clinician was none other than Kid Ory! He said several nice things about our playing that we likely didn't deserve and gave us a few helpful suggestions. Oh, had I only realized at the time the importance of this gentleman - a kingpin that was very present and involved in the actual birth of jazz!