Inside the Mind of a String Quartet 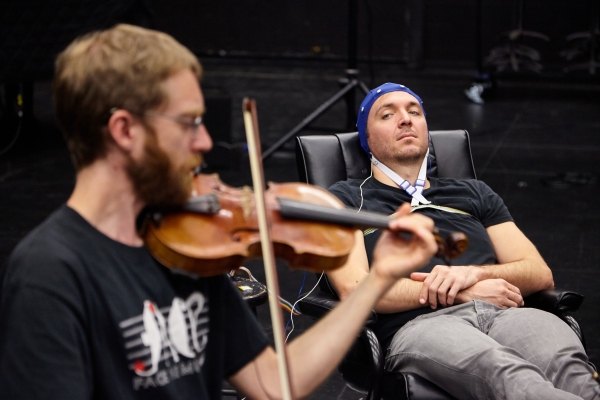 Faculty from the UW School of Music and the Center for Digital Arts and Experimental Media (DXARTS) are—literally—getting inside the minds of the musicians of New York’s JACK QUARTET in a year-long exploration on the frontiers of artistic creation.

Composition faculty and DXARTS co-founders Juan Pampin and Richard Karpen are conducting research this year with the JACK Quartet, the first fellows in a collaborative arts research initiative under way at the University of Washington with support from the Carnegie Mellon Foundation. The quartet will make several trips to the University in 2016-17 to collaborate with Pampin, Karpen, and a team of post-doc researchers, graduate students in DXARTS and Music, and technical staff in ongoing creative experimentation with tools and technology—including mini Electroencaphalography (EEG) machines, motion sensors, and eye tracking software—that can be used to collect data to be transformed into sound.

“For the Mellon project with the JACK, Richard and I are planning to use brain data (EEG) from the musicians’ playing to generate the music,” Pampin says. To accomplish this, musicians are outfitted with sensors that can detect brain activity arising in the act of performance, listening, or seeing, which can then be used to create a new kind of music of the brain.

Methods for collecting data have been developed over the course of the past several years by students and faculty in the DXARTS course Art and the Brain, an interdisciplinary seminar course devoted to exploring neurological aspects of human creativity. Co-taught by Pampin and colleagues James Coupe (DXARTS), Eberhard Fetz (Physiology and Biophysics), and neuroscientist Thomas Deuel, a DXARTS affiliate faculty member who works for Swedish Neuroscience, the course is enabling ongoing research and experimentation into ways to use the tools and discoveries of neuroscience in the practice of creation.

“One of the primary areas of research with JACK will be the exploration of new brain and nervous system sensing methodologies as extensions to musicians' performance practice with traditional instruments and voice,” Karpen says. “Later in the year, other musicians will join to make a larger ensemble of performers, composers, and support team towards the creation of two or three major new works.”

During  JACK’s first residency, work commenced at the UW’s Meany Studio Theater over a ten-day period in mid-October. On this first visit, the collaborators were just getting started, experimenting with variables and gauging results. JACK’s violinist Austin Wulliman donned an EEG cap outfitted with electrodes positioned to measure neural activity in specific areas of the brain. DXARTS doctoral student Marcin Pączkowski injected each sensor with a special gel to enable transmission of the data. Williman then relaxed into a quiet pose and closed his eyes while violinist Christopher Otto began to play. Pączkowski and Karpen monitored the resulting spikes in brain activity on a nearby EEG machine connected to a computer monitor.

How the process plays out in the final cut remains to be discovered. At the close of the musician’s first residency visit, Karpen reported forward momentum in a process that will unfold over the coming year.

In the meantime, collaborators are energized by possibilities for both creative and scientific discovery. The technology employed in these experiments are being used in a context quite different from the medical and scientific environments in which they typically operate, Karpen says, allowing neuroscientists like Deuel unique angles into understanding the role of the brain in creativity. “Portable EEG and other nerve sensors makes it possible to consider much more complex integrations of brain and body signals into the domain of music and art performance,” Karpen says. “The JACK Quartet and UW faculty have collaborated previously on several highly successful projects that have been at the same time highly experimental and accessible to audiences. This project allows all of us to build on those successes and to explore at an even deeper level mutual areas of artistic (conceptual, performative, and technological) and scientific interest.”