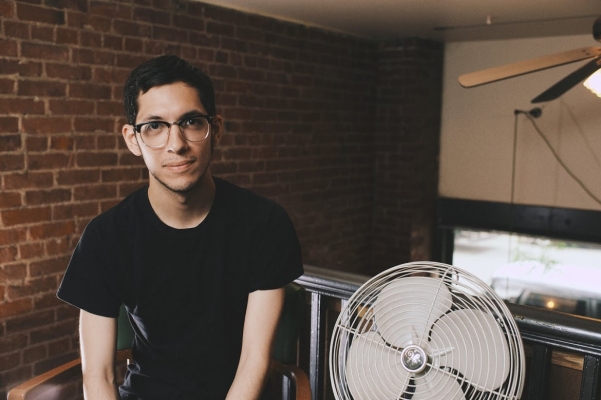 New scenery, international presentations, and recent recordings by UW Music students and alumni demonstrate the range of musical activities they are engaged in both at the university and in the larger world.

Recent jazz studies grad alum Gregg Belisle-Chi (MM, Jazz and Improvised Music) reports a new record and new scenery with a relocation to New York City. The guitarist’s recently released album of original songs inspired by the poetry of Carl Sandberg, “I sang to you and the moon,” features vocalist (and spouse) Chelsea Crabtree and two of the guitarist's UW peers, trumpeter Raymond Larsen (BM, Jazz Studies, MA Jazz and Improvised Music), and bassist Carmen Rothwell ('14 BM, Jazz Studies). Recorded last summer with help from bassist/producer and faculty member Luke Bergman, the album draws influences from the music of the hometown heroes Bill Frisell and Fleet Foxes, as well as friends and musical compatriots the Westerlies.

Beslisle-Chi’s bandmate Carmen Rothwell, meanwhile, is already making a name for herself in the Big Apple. Paste magazine recently called her an "astounding young contemporary bassist" and listed her in its article Ten Women Instrumentalists Who Redefine Jazz, placing her in the esteemed company of pianist-composer Mary Lou Williams, trombonist Melba Liston, and pianist Alice Coltrane, among others.

Music Education graduate student Skuli Gestsson, from Reykjavik, Iceland, released a new recording this past fall with the award-winning indie rock band Ditka. “Easy Street,” is the group’s fifth release. Gestsson also is educational consultant for Bjork’s Biophilia project, and is writing music textbooks for use in Iceland and other parts of Scandinavia. In addition to these activities, he recently presented a performance-lecture on rimur for faculty and students in the UW’s Scandinavian Studies department.

Claire Anderson, PhD candidate in Ethnomusicology, has been contracted by Smithsonian Folkways to work on six-week project in study of current and prospective education-based projects of the archive and label. She will be working under the direction of former Music Edu student Huib Schippers, now curator-director of Smithsonian Folkways.

Jiannan Cheng (MM, 2014), graduate of the UWSOM wind conducting program who now serves as lead TA in the orchestral conducting program at the University of Cincinnati Conservatory of Music, is studying conducting in Munich on an extension program through the Conservatory. She recently made the final round of 20 (out of 200) orchestra conductors at a conducting competition in Thessolaniki, Greece.

Graduate wind conducting student Mark Tse, assistant conductor of the UW Wind Ensemble and frequent conductor of the UW Concert Band, has been named a 2016 American Prize finalist in the Bands/Wind Ensemble division for his work at the School of Music this past year. Tse, who earned a master's degree in conducting at the New England Conservatory before his arrival at the University of Washington in fall 2015, placed second in the Bands/Wind Ensemble university division in 2015 for work at NEC. Administered by Hat City Music Theater, Inc., a nonprofit organization based in Danbury, Connecticut, The American Prize was founded in 2009 and is a cash award conferred annually.