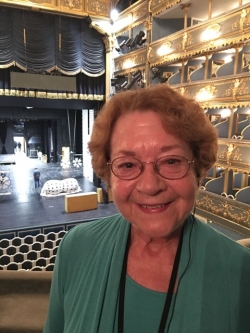 A public memorial service on Sunday, March 26, 2017 at the School of Music’s Brechemin Auditorium honored the life of Mina Bloedel (Brechemin) Person, who died Feb. 10 following a recent struggle with lung cancer.

Born in Manhattan on May 18, 1946, to Louis Brechemin and Charlotte Van Alstyne (Bloedel) Brechemin, Mina was a Seattle resident since the early 1950s, attending the Bush School and Smith College before ultimately graduating from the University of Washington, where she studied the Classics. Mina married Phillip A Person in 1965. The couple was divorced in 1985 and Mina married Bruce Swartz in 1993.

Following in the footsteps of her philanthropically minded parents, Mina was a steadfast patron of the arts, providing lifelong support to numerous arts and culture organizations in the Seattle area and the Pacific Northwest, including the UW School of Music.

As president of the Brechemin Foundation, founded by her parents, Mina continued that organization's long history of patronage of the University of Washington School of Music, including funding for renovations to Brechemin Auditorium and the Brechemin Scholarship, which has provided significant financial assistance to UW music students for more than 50 years.

Mina was also instrumental in providing funding for free admission to the UW community and general public to dozens of concerts and performances at Brechemin Auditorium and the Walker-Ames Room of Kane Hall.

In addition to UW's School of Music, Mina was involved with the UW's Meany Center for the Performing Arts, serving as a longtime member of the Meany Center Advisory Board and as a member of Meany's Education Committee.

Preceded in death by her first husband, Phillip, in 1990, and her second, Bruce, in 2016, Mina is survived by her children, Deborah Person and Phillip B. Person, daughter-in-law Katie Person, and grandsons Phillip Clair and Luke.

In remembrance of Mina and her family’s decades of generosity to the School of Music, we share the text of remarks from Mina’s March 26 memorial service at the Music Building, delivered by former Brechemin scholar (and UW Music professor) Robin McCabe.

Good afternoon, everyone.  It is my personal honor and pleasure to welcome you here today, and my collective honor to represent the School of Music in hosting this gathering.  The School, and indeed this very hall, has an indelible association with the Brechemin family.

I knew Mina as a loving spouse, a proud mother, a blissed-out grandmother, a passionate Husky sports fan, a passionate musician and consumer of music . But most of all I knew her as a kind and dear friend, devoted to the causes in which she believed.

The name “Brechemin” is today synonymous with excellence in the School. Imagine the vision of Charlotte, and Louis  (“Louie,”  as I always heard him referenced), to come forward and create an array of scholarships across the areas of the school: Piano, Voice, Strings, Winds, Brass, Guitar, Harp, Percussion, Composition and Musicology!  Louis was an avid music historian.  His master’s thesis, on the ‘Mephisto’ elements in the piano music of Franz Liszt, is in our library today.

These scholarships created an armada, and I use that word deliberately, because the scholarship empowered the faculty to recruit and retain the most gifted talent in all these different areas.  Remarkable philanthropy, and strategy, as well!

Now, Mina’s mother, Charlotte, was a force!  Small, wiry, keenly intelligent and very opinionated, she did not suffer fools gladly.  She knew what she liked, and what she did not like. Richard Campbell, the late music critic of the Seattle PI, told me years ago that when he was covering the Seattle Symphony concerts downtown in the Opera House, Charlotte would hover in the wings of the hall or corridors, waiting to pounce on him when he was entering or exiting.

“Campbell,” she would bark, “that piece in Monday’s paper…you have no idea what you are talking about!”  Or more rarely, “Campbell! You got it right on Wednesday, you hit the nail on the head…for once!” As she stubbed her cigarette out on the little sandbox–shelf, Richard said he had the feeling it was he, himself, that she was trying to extinguish!

Charlotte used to sit in the very back row of this hall, reviewing the performances of the Brechemin Scholarship winners at their annual concert.  I can remember myself, as one of those winners, how keen and interested she was in our playing and in our potential.  ‘Now, you are a horse I can back!”  she once told me. I was honored to receive the Brechemin scholarship for three of my four undergraduate years here.

“What happened to that fourth year?” Deborah Emory once asked me. “Well,” I said, “I did not play as well that year. I got a nice scholarship, but I did not get the Brechemin!”

Now fast forward from those days, to 1989.  I am here as a newly minted assistant professor in the School, and Brechemin Auditorium is to be remodeled, and formally dedicated to Louis and Charlotte. I had the honor of playing that dedicatory recital, right here.  And…right here, in the front row, sat Mina with the then-director of the School, Dan Newman.  She was beaming and cheering throughout. When I finished, she said, ‘My father would have adored that Liszt piece you played (It was the Rigoletto Paraphrase).

Talk about full circle:  Charlotte in the back row, and now, Mina in the front row!

Mina did many things for the School during my tenure as director. House concerts at the Highlands, at Kelden Place, and even festivities at Orcas Island, for the Washington State Centennial. Mina helped me get a miniature cannon from the Orcas Yacht Club, and it was fired off  (rather too many times) during a rendition I had arranged of Tchaikowksy’s 1812 overture, for two pianos, eight hands!

Then of course there were all her tireless, self-effacing efforts in our community.  Ladies Musical Club, Music in the Schools, King FM, and all the work with the Meany Center’s programs.

Michael Partington, now on our guitar faculty, could not be here today, as he is abroad.  But he did want to express his appreciation for the Brechemin scholarship he received as an undergraduate here   -  it gave him encouragement that he just might truly have a future in the field of music! Doubtless the scholarships have done this, over the years, for hundreds of talented motivated musicians.

Years ago, in a conversation with a childhood friend who is now a Jesuit priest, I had some real epiphanies about what it means to live  the ‘authentic’ life.  My friend described it this way:  It is not about accomplishment, rank, initials and titles by one’s name, or various notches on the gunbelt of productivity. The authentic life is that which connects meaningfully, and enduringly, to others. What will we have meant to others, when we leave this life, for the next step?

I believe that Mina’s life is emblematic of that authenticity. She cared, she connected, and she will be remembered in all the music that is yet to be made by those she touched.

“What will survive of us is love,” said Philip Larkin.  I know now that Mina has gone on to what George Eliot called ‘The Choir Invisible, whose music is the Gladness of the World.” She will be a good choir member, purposeful, fun, and she may even give the altos a little jab now and then if they are not pulling their weight.