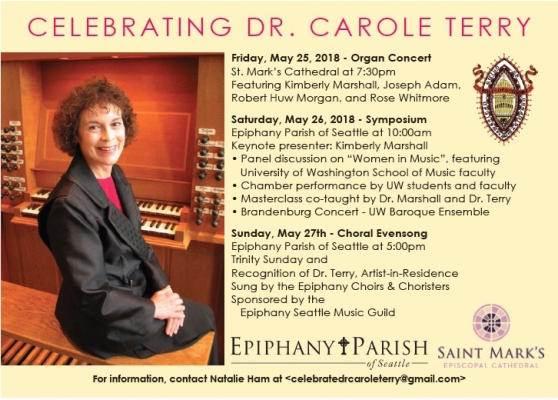 The American Guild of Organists - Seattle Chapter, in partnership with St. Mark's Cathedral and Epiphany Parish of Seattle, joins with current and former students and colleagues this month to present a symposium honoring UW Organ Professor Carole Terry.

"All are welcome to join us as we celebrate Dr. Terry to kick off her 40th year of artistry and pedagogy," says Natalie Ham, a UW Music graduate student and a lead organizer of the symposium.

Friends, colleagues, and former and current students of Dr. Terry may submit messages and memories to Natalie Ham at celebratedrcaroleterry@gmail.com by Monday, May 14 for inclusion in a compilation to be presented to Dr. Terry at the close of the celebration.

7:30 pm Concert on the Flentrop at St. Mark’s Cathedral