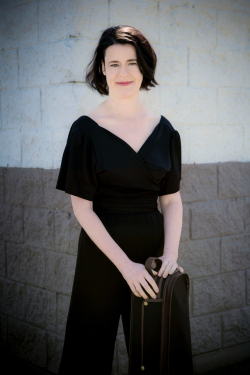 In the lead-up to a Meany Hall recital on April 17 in which she unveils a new major work for viola and other instruments, the chair of the UW Strings program reflects on a busy year that has seen the release of a new CD, Schumann Resonances, as well the rewarding work of preparing a complex multi-song work, Folk Style Project, for its world premiere.

School of Music: You’ve had an extraordinarily busy year with the release of a new CD and the upcoming premiere of Folk Style Project, an ambitious work including 13 interrelated original songs inspired by influences in your own life. You seem to be in an especially creative period of your career. Is that, in fact, the case, and if so, what are some of the circumstances that have inspired this phase?

Melia Watras: I try to always be creating, and to have different projects going on in different stages. Right now, it is just about timing that a few of them are coming forward to the public simultaneously. The Folk Style Project has been developing over the past three and a half years, and I actually plan on it continuing (in different cycles, and maybe not right away because I have some other pieces I’d like to write too!). And, CDs can take a while to come to fruition, especially when many of the pieces are premieres, as was the case in Schumann Resonances.  I am very excited that I can now share these songs and recordings!

SOM: The 13 pieces that make up Folk Style Project are each inspired by a personal connection to you or your life. Can you give us an example of how one or more of the pieces were inspired?

MW: It’s true that each of the pieces in the Folk Style Project is taken from connections to, or things in my life. However, my hope is that they are also experiences, feelings, events, and stories that we all share, and that everyone can relate to in some way. (And, like many things, if it isn’t something one identifies with now, maybe it will be at a later time.) For example, one of the songs is based on a funny story about Miss Vina Vu Valdés, when she was 4 years old, visiting Salzburg with her parents. When Vina found out that Mozart was from Austria, she said, “but Mozart lives in Seattle!” Another I wrote when my father passed away. One is about my friend, Sæunn Thorsteinsdóttir and her feelings for her homeland. Of course, everything I do is connected to Mike Lim, my husband, and Atar Arad, my beloved mentor, in some way, so there are songs about them. Catherine Connors, chair of the Classics Department here at UW, invigorated me with her deep knowledge of Virgil in many ways, but in this particular song, I based it on her essay Seeing Cypresses in Virgil.

At the root, the songs are celebrating love for one’s family and friends, and the art in our world that helps bind us in shared experiences.

MW: For the Folk Style Project pieces, I knew I wanted voices and strings. I’m grateful to play in a string trio called Frequency that is generous about playing my compositions and has enthusiasm for new music and experimentation. So, these 13 songs use voice, violin, viola and cello in different combinations.

For my process in general, how a composition develops depends on that particular piece. My most recent and upcoming works are for specific venues or performers. I was lucky to work with the violinist Mark Fewer, who included me in his commissioning of caprices. I’m writing music for a play, The Year of Magical Thinking, directed by Sheila Daniels, where she asked specifically for solo viola, and I hope to write a piece for pianist Cristina Valdés.

SOM: In recent years you’ve become much more involved in composing. Do you see yourself moving more in that direction in the coming years? How does composing inform your viola performance and vice versa?

SOM: In February you released a new CD, Schumann Resonances, on Seattle’s Planet M Records. The title is a play on both the theme of the CD—pieces inspired by Schumann’s Märchenbilder, Op. 113, but the term “Schumann Resonances” also refers to a global electromagnetic resonance phenomenon predicted by physicist Winfred Otto Schumann. So while fairytales and folksongs are at the heart of this set of compositions, there are also these rather cosmic references based in physics and science. Is this intentional? Can you elaborate on the forces at work in your creative process for this CD?

MW: How fun that you mention the global electromagnetic resonance phenomenon! I only became aware of it when I was thinking of a name for this collection of pieces. While I didn’t specifically try to refer to Winfred Otto Schumann’s discovery with the title of this disc, I liked the idea that there was something electromagnetic between the pieces. I was considering more of the resonance Robert Schumann has made in music, particularly with his viola piece, Märchenbilder, and the way making music with friends has a special sound, in this case, Richard Karpen and Cuong Vu (composers included with me on this recording).