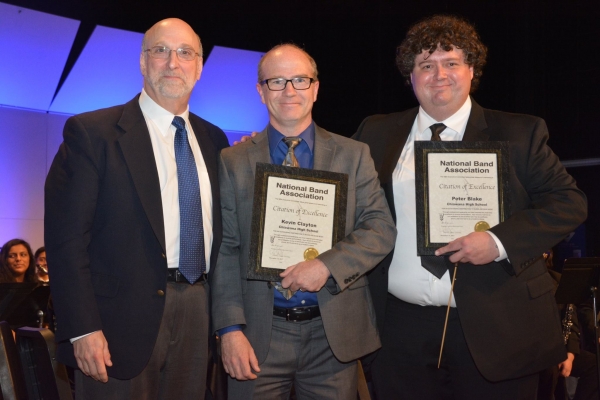 An alumnus and a professor of the University of Washington School of Music received top honors recently from the Washington State Music Educators Association (WMEA).

UW Music Education Professor Patricia Shehan Campbell, meanwhile, was named 2020 Educator of the Year at the College/University level on the basis of her impact on school music teachers across the state of Washington, nationally, and internationally. "We recognize your outstanding contributions to pre-service and practicing teachers in K-12 school music positions," her notification letter from WMEA reads, "and your role as a powerful advocate for music education studies in schools and universities.”

True to form, Professor Campbell was quick to praise Kevin Clayton for his achievements.

“Just like all Music Education majors, Kevin is a fine example of the interdependent education he received here in our School of Music,” she says. “Kevin was enrolled in multiple courses in Music History, Theory, Ethnomusicology and Music Education.  Further, he played in Tim Salzman’s Wind Ensemble for the four years of his degree program.”

Clayton’s award is the latest in a series of honors awarded recently to UW Music Ed alumni. “We graduate many strong music education students into award-winning work as professional music educators,” Campbell says. “Kevin’s the latest. Nancy Duck-Jefferson, another Husky alum, was awarded the WMEA High School Music Educator of the Year in 2018. Andrea Rahn Peterson was named National U.S. Teacher of the Year in 2007—she topped teachers from all states, across all subjects, across all grades.”

Clayton credits UW Music professor Timothy Salzman among the inspirational educators who have shaped his career. “He told us in a rehearsal that often the best musicians go insane because they pursue the unattainable... perfection,” he said in a post on social media announcing the honor.

As director of Chiawana High School’s band program, which did not exist when he took on the position, Clayton built a music program from scratch over ten years of serving a district of underserved students, eventually elevating the school’s marching band to an award-winning ensemble.  In 2018, he was awarded the first national Dr. William P. Foster Project Award of Excellence, presented by the nonprofit Music Education Alliance in an initiative aiming to provide musical resources and opportunities in underserved communities.

"When I moved to Pasco, one of my personal goals was to prove that all kids can achieve, regardless of their financial backgrounds or family situations,” Clayton said in an interview with Halftime Magazine. “Getting this award was a culmination in recognition for what we’re achieving in our program.”

WMEA honorees are nominated by the WMEA membership, made up of music educators from across the state. Awards are presented at the WMEA state conference in Yakima in February, 2020.