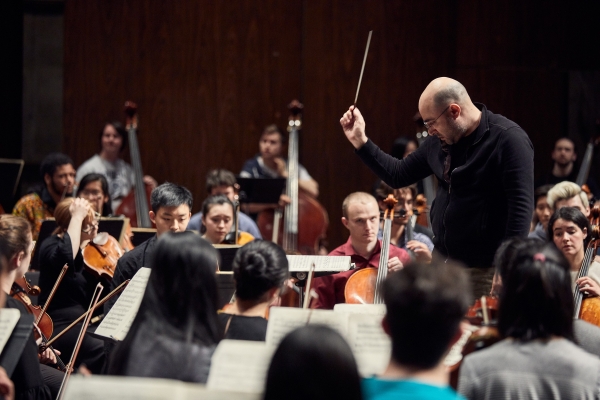 The School of Music's ensemble directors faced significant hurdles in quickly reimagining 60-to-100-member ensemble courses in the face of a global pandemic. But David Alexander Rahbee, director of orchestral activities at the UW, wasted no time in activating a plan for the student musicians of the University of Washington Symphony Orchestra to use their time fruitfully in spring quarter for a deeper-than-usual examination of all nine of Beethoven's symphonies.

Rahbee's choice of composer was easy. The year 2020 marks the 250th anniversary of the composer’s birth, and he had intended all along for the orchestra to take part in the world-wide celebration. Beyond observing a milestone anniversary, though, was the matter of the repertoire itself.

"Beethoven symphonies are the cornerstone of the symphony orchestra’s repertoire, and it is vitally important for all orchestra musicians to have not only a familiarity with all of them, but to learn about them by any means possible," he says. "In the shadow of all the sadness, frustration, and disappointment from not being able to rehearse and perform in person, it was not an easy task to determine a way to move forward. I asked myself and my colleagues at the UW and other institutions: What can be done to make us a better orchestra when we return to normal rehearsal activities, whether it is next year here at the UW, or for those graduating, wherever they may play in an orchestra next?"

Rahbee contemplated a number of possible answers to that question. "I considered the idea of trying to use online technology for playing pieces remotely. I am aware that other orchestras around the world have done this with varying degrees of success. Even with the best technology, and with everyone having access to their instruments, it could be interesting, but I question whether or not it's really a valuable educational tool, as far as the music itself is concerned. We may try a few small projects like this, but overall it is not a sustainable or educational method."

He decided instead upon an approach involving no actual playing of instruments. Incorporating time for deep reflection and listening on the part of each individual student and time to gather as a group each week for online discussion of the repertoire, Rahbee’s revised lesson plan invites a week-by-week examination of the scores, with Rahbee guiding the orchestra on what he calls "a tour of the interpretational process," sharing insights into all of the many decisions that go into conducting a Beethoven symphony—or nine.

"One of the most important aspects we will miss with remote learning is the sense of community," Rahbee says. "That is why we are organizing simultaneous online meetings and not sending recorded lectures. While attempting to hold rehearsals over Zoom might be an interesting challenge, I believe this will be a better use of the time given the situation. There are many, many aspects to orchestral playing which we do not have time to address and discuss during the rehearsal process, and we will now be able to focus on those aspects more."

In November 2019, the UW Symphony Orchestra (David Alexander Rahbee, director) performed Beethoven's Symphony No. 4 in B-flat major, op. 60 at the UW's Meany Hall. Audio of the performance may be found on Dr. Rahbee's Soundcloud channel.  Click the link below to travel directly to Movement 1.