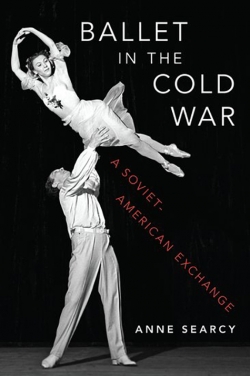 A series of ballet tours between the United States and the then-Soviet Union from 1959 to 1962 sparked love of ballet on both sides, but also some misunderstanding, UW music assistant professor Anne Searcy writes in her new book, “Ballet in the Cold War: A Soviet-American Exchange.”

The tours by the Bolshoi Ballet, the American Ballet Theatre and the New York City Ballet were popular, but as Searcy reports, the two audiences viewed ballet differently: “Americans loved Soviet dancers but believed that Soviet ballets were old-fashioned and vulgar. Soviet audiences and critics likewise appreciated American technique and innovation but saw American choreography as empty and dry,” Searcy writes.

Searcy is a new faculty member and expert on music history in the UW School of Music, arriving this fall from the University of Miami. Her research explores the connections between music, politics and dance. Searcy’s book was published this month by Oxford University Press.

In the book, Searcy draws on archival sources to study ballet as a Cold War cultural exchange and to suggest that “the separation between Soviet and American ballet lies less in how ballets look and sound, and more in the ways that Soviet and American viewers were trained to see and hear.”

UW Notebook asked Searcy some questions about this book at the nexus of dance and geopolitics.