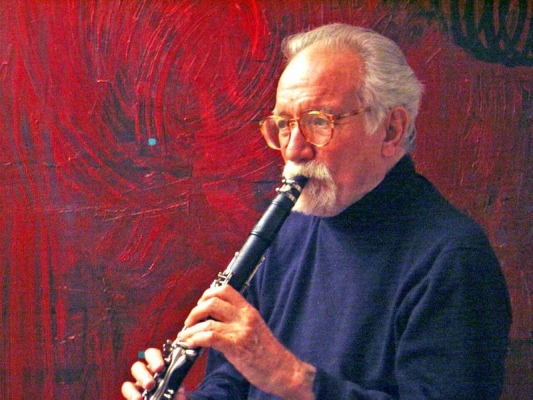 ARTIST BIOS
Thomas Collier, percussion
Director of percussion studies at the University of Washington School of Music since 1980, associate professor Tom Collier has performed and recorded with many important classical, jazz, and popular artists, in addition to recording and performing with his own jazz group. He is a veteran of more than 50 years in music -- his first public appearance was at age five, on xylophone, and his first professional performances were made as a nine-year-old marimba virtuoso.

He has made commercial and educational recordings with his own jazz group for various jazz labels, including Inner City (New York), Music Minus One (New York), TC Records (Seattle), Nebula (Baton Rouge), and Studio 4 (Los Angeles).

Bill Smith, clarinet
Bill Smith—also known as a "classical" composer under his full name, William O. Smith—was born in Sacramento and grew up in Oakland, California, where he began playing clarinet when he was ten. He put together a jazz group to play for dances at 13, and at the age of 15 he joined the Oakland Symphony. He idolized Benny Goodman, but after high school, a brief cross-country tour with a dance band ended his romance for the life of a traveling jazz musician. He gave two weeks' notice when the band reached Washington, D.C., and, encouraged by an older band member to "get the best education you can get," headed to New York.

He began his formal music studies at the Juilliard School of Music, playing in New York jazz clubs like Kelly's Stables at night. Uninspired by the Juilliard faculty, he returned to California upon hearing and admiring the music of Darius Milhaud, who was then teaching at Mills College in Oakland. At Mills, he met pianist Dave Brubeck, with whom he has often played since, in both the famous Dave Brubeck Octet and The Dave Brubeck Quartet, as well as other groups. In 1947, he composed Schizophrenic Scherzo for the Brubeck Octet, one of the earliest works that successfully integrated jazz and classical techniques, a style that later was given the name "third stream" by Gunther Schuller (Mitchell 2001). He studied composition with Roger Sessions at the University of California, Berkeley, where he was graduated with a bachelor's and a master's degree.

Winning the Prix de Paris presented Smith the opportunity for two years of study at the Paris Conservatory, and in 1957, he was awarded the prestigious Prix de Rome and spent six years in that city. He has since received numerous other awards, including two Guggenheim grants (Monaghan 1996).

After a teaching stint at the University of Southern California, Smith began a thirty-year career at the University of Washington School of Music in Seattle, where he taught music composition and performance, co-leading the forward-thinking Contemporary Group first with Robert Suderburg, and then with trombonist Stuart Dempster, from 1966 to 1997 (Mitchell 2001). Both Smith and Dempster are currently professors emeritus.

Smith has investigated and cataloged a wide range of extended techniques on the clarinet, including the use of two clarinets simultaneously by a single performer, inspired by images of the ancient aulos encountered during a trip to Greece (Monaghan 1996), numerous multiphonics, playing the instrument with a cork in the bell, and the "clar-flute," a technique that involves removing the instrument's mouthpiece and playing it as an end-blown flute. As William O. Smith, he has written several pioneering pieces that feature many of these techniques, including Duo for Flute and Clarinet (1961) and Variants for Solo Clarinet (1963) (Smith [n.d.]), and he compiled the first comprehensive catalogue of fingerings for clarinet multiphonics (Rehfeldt 1994, 99–121). Smith was among the early composers interested in electronic music, and as a performer he continues to experiment with amplified clarinet and electronic delays. He remains active nationally, internationally, and on the local Seattle music scene as well, where in 2008, he composed, recorded, and premiered a "jazzopera" titled Space in the Heart (Anon. 2008).

Steve Korn, drums
Seattle drummer Steve Korn is a musician's drummer. Always making the musical content and quality his first priority, Steve's versatile drumming and overall musicianship have made him an integral part of the Seattle jazz scene. Audiences across the United States, Europe and Russia have heralded his work, hearing him on several tours and recordings.

Steve has released three CDs as a leader: Here and Now (1999), Pride and Joy (2000), and Points In Time (2004). All were released by Origin Records and have received rave reviews. In fact, each was nominated as Northwest Recording of the Year by Earshot Jazz. Steve won the Earshot Golden Ear Award for Northwest Emerging Artist for the year 2000.

A published author and composer, Steve has contributed transcriptions to two books for the Hal Leonard Corporation (The Jack DeJohnette Collection and Drum Standards)in addition to articles for Down Beat, Percussive Notes, and Modern Drummer magazines. Steve created and coordinates the University of Washington Jazz Workshop. He holds a Master's Degree in Percussion Performance from the University of Washington and is an active educator participating in music camps, festivals, and clinics throughout the year.

Carmen Rothwell, bass
Carmen Rothwell, a double bassist in the University of Washington's Jazz Studies program, is becoming an active voice in Seattle's jazz and improvised music scene. A Seattle native, she began playing the bass in middle school, where she benefited from the music program at Washington Middle School before going on to join Garfield High School's jazz bands and orchestras. In high school, she had the opportunity to perform around the country and internationally, and was the recipient of numerous individual and group awards for her performances. Now a scholarship winner at UW, she plays in several UW ensembles as well as a number of groups outside of school. She is also involved in the Improvised Music Project (IMP), a Registered Student Organization that works to present great live music to the UW and Seattle communities through monthly showcases and an annual festival in the spring. Carmen is currently a senior and studies with Luke Bergman, Ted Poor, and Cuong Vu.