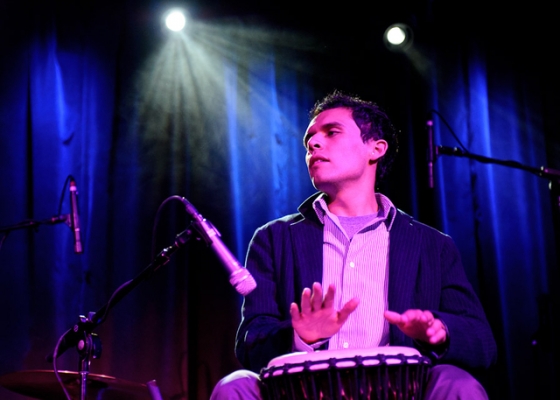 Guest percussionist Ivan Trevino and students of the UW Percussion Studio present a concert of music by Trevino and others.

Ivan Trevino is a composer, percussionist, and rock drummer currently living in Rochester, NY. As a composer of percussion music, Ivan has received multiple awards and commissions, including 1st Prize (2011) and 2nd Prize (2007) in the Percussive Arts Society’s International Composition Contest.

His indie-rock influence is evident in his compositions, which have become standard repertoire for professional and collegiate musicians around the world. He will have four new commissioned works premiered this year, including two world premieres at PASIC 2013.

Ivan has also drummed, recorded, and composed extensively with Break of Reality, a national touring cello rock band. As a founding member of Break of Reality, the band has reached international acclaim, selling over 50,000 albums and touring extensively across the U.S. Ivan’s Break of Reality compositions have been heard by millions of listeners via Pandora Internet Radio and also featured on television programs such as Dateline NBC and PBS.

Ivan is currently on faculty at Eastman School of Music, where he teachers a course in music business. He also teaches composition and chamber music at Hochstein School of Music & Dance.

Ivan holds a Master’s Degree in percussion performance from the Eastman School of Music, where he studied with Michael Burritt and John Beck. He also holds a Professional Certificate in Music Business from Berklee College of Music’s Extension School. He is currently an artist/clinician for Malletech Instruments and Mallets.