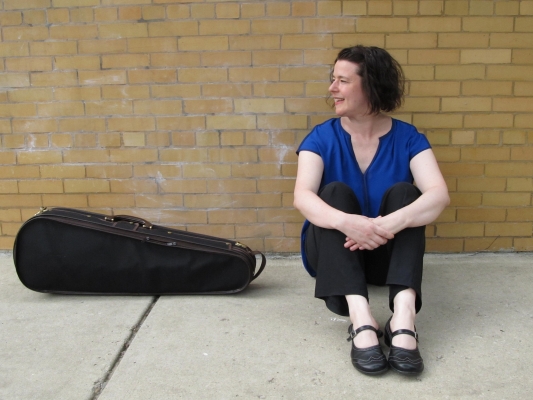 Described as "staggeringly virtuosic" by The Strad, violist Melia Watrashas distinguished herself as one of her instrument's leading voices: as a soloist, recording artist, and cofounder of the acclaimed Corigliano Quartet. An accomplished and adventurous performer of new music, she has championed the works of living composers throughout her career. She has commissioned, premiered and recorded numerous new compositions, while appearing onstage at prestigious venues such as Carnegie Hall, Weill Recital Hall, and Alice Tully Hall.

Her expanding discography has garnered considerable attention and praise from the media. Of her debut solo CD, Viola Solo, Strings remarked, "Watras is a young player in possession of stunning virtuosic talent and deserving of the growing acclaim."

She serves as Associate Professor of Viola at the University of Washington, where she is chair of the Strings Division and a Donald E. Petersen Endowed Fellow. She currently resides in Seattle with her husband, Corigliano Quartet violinist Michael Jinsoo Lim.

Watras plays a viola made by Samuel Zygmuntowicz.

Praised by Gramophone for playing with “delicious abandon,” and described as “bewitching” by the Seattle Times, violinist Michael Jinsoo Lim enjoys a dynamic musical career as concertmaster, soloist, chamber musician, recording artist, and teacher. Recently named concertmaster of the Pacific Northwest Ballet Orchestra in Seattle, Lim is also widely known for his work as co-founder of the renowned Corigliano Quartet. He is in demand as a chamber musician and as a performer of new and experimental music, performing as a member of Open End, an ensemble specializing in contemporary music and improvisation.

As a member of the Corigliano Quartet (www.coriglianoquartet.com), Lim has enjoyed critical acclaim across the U.S. and abroad and has won numerous awards, including the Grand Prize at the Fischoff Chamber Music Competition and the ASCAP/CMA Award for Adventurous Programming. Called “musicians who seem to say, ‘Listen to this!’” by the New York Times, the Corigliano Quartet has performed in the nation’s leading music centers, including Carnegie Hall, Weill Recital Hall, and the Kennedy Center. The group’s most recent CD was named by the New Yorker as one of the top ten Classical recordings of 2007.

Lim’s work as a performer has also extended to the theater. He starred in director Nick Schwartz-Hall’s Tempo of Recollection, a stage performance about the life and work of composer Erwin Schulhoff, and will serve as consultant for Seattle Repertory Theatre’s upcoming production of Opus, directed by Braden Abraham.

Lim was born in Lafayette, Indiana and began playing the violin at the age of four, studying with his mother, Sun Boo Lim. He went on to study with Vartan Manoogian before beginning his formal training at Indiana University, where he was a pupil of the legendary violinist and teacher Josef Gingold. Lim received Bachelor’s and Master’s degrees from Indiana University, where he won First Prize in the school’s Violin Concerto Competition. He also held a faculty position at Indiana as a Visiting Lecturer. Later, he taught chamber music at the Juilliard School as an assistant to the Juilliard String Quartet. He has served as Musical Artist in Residence at Dickinson College and on the faculty of the New York Youth Symphony Chamber Music Program. He currently serves on the faculty of Cornish College of the Arts, where he teaches violin, viola, and chamber music. Lim also maintains a private studio of violin and viola students.

Lim has recorded for Naxos, DreamWorks, Albany Records, CRI, Bayer Records, and Aguava New Music, and appears on numerous television and film soundtracks, including the Oscar-winning score to Brokeback Mountain. He has performed live on WFMT-Chicago’s Live From Studio One and has been heard on NPR programs such as Performance Today and All Things Considered. Lim has made radio and television appearances in the U.S., Spain, Costa Rica, and Korea.

In addition to his work as a performer, Lim has also served as a recording producer. He has produced the critically acclaimed CD, Melia Watras: Viola Solo and co-produced Prestidigitation, Ms. Watras’s latest recording on the Fleur De Son label. Lim currently lives in Seattle with his wife, violist Melia Watras.

Seattle Symphony Resident Pianist Kimberly Russ celebrates over ten seasons playing with the orchestra. Continually in demand as soloist and collaborative pianist alike, Russ has appeared with the Seattle Philharmonic and the Cascade, Sammamish, Port Angeles and Central Florida Symphonies. Performance highlights have included solo appearances with the Seattle Symphony for the Beyond the Score and Celebrate Asia series, and performances with guest orchestras the Israel Philharmonic and the Mariinsky Orchestra. Russ is Principal Keyboard of The All-Star Orchestra, a new made-for-television symphonic educational series currently airing on PBS nationwide. The DVD series can be purchased through NAXOS. Russ has also begun Harmony for Heroes, a nonprofit musical outreach for our military and veterans.