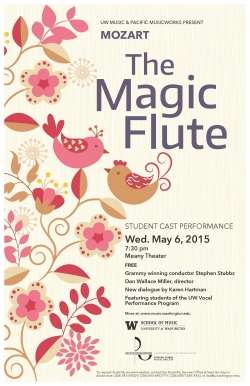 The School of Music and Pacific MusicWorks co-present this special student cast performance of W.A. Mozart's masterwork The Magic Flute.  Grammy-winning conductor Stephen Stubbs conducts the Pacific MusicWorks Orchestra (and UW instrumental performance students) in Dan Wallace Miller's staging of one the composer's most profound and beloved works, performed by the talented students of the UW Vocal Performance program. With new dialogue by Karen Hartman.

One of Mozart’s crowning achievements, The Magic Flute is a potent alchemical mixture of popular music and theater with a depth of meaning that is still mysterious and controversial. The fact that Mozart had steeped himself in the music of Handel and Bach in the years leading up to the creation of The Magic Flute makes it also a personal testament to his admiration for their art.