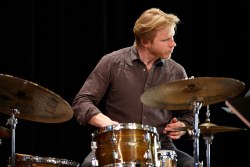 His first two albums for the Sunnyside label, Roses, and Ghosts of the Sun are with Paul Motian, Reid Anderson and Ben Monder.   2012′s new album, La Peur du Vide was recorded live at the Village Vanguard with  Orrin Evans, Eric Revis,  and Andrew Cyrille.

Josh Roseman is a New York based jazz trombonist whose presence has been felt in the downtown scene of improvisers from the 1990s onward. Born June 5, 1972 in Boston, MA, he picked up the trombone because it was the most prevalent instrument in his household. His father, uncle, and cousins were all musicians, and as a youth he attended many concerts, participated in numerous classical and jazz demonstrations, and listened to the AM pop radio of the day. Classical influences informed his playing, but he was also enjoying Motown artists Stevie Wonder and Marvin Gaye, Sly & the Family Stone, Jimi Hendrix, Bob Marley, or early ska music (as his mother was from Jamaica) and the Beatles. As his jazz tastes developed, he heard John Coltrane, Ornette Coleman, Charlie Parker, Henry Threadgill, and James Blood Ulmer. Moving to higher education, Roseman stayed close to home, studying at both the Berklee and New England Conservatories.

Roseman's most telling mentorship was with trumpeter Lester Bowie, where he acquired a refined style and sense of humor. Arriving in New York City where he was a participant in the early Knitting Factory heyday of the early '90s, Roseman was acclimated quickly as a co-founder of the acid-jazz dance band the Groove Collective and the less appreciated Giant Step. Among the many artists he has performed with are Joe Maneri, Muhal Richard Abrams, George Russell, and Bob Moses while at school, and professionally, Frank Lacy, Graham Haynes, John Zorn, the Dave Holland Big Band, Roswell Rudd, Joey Baron, Ellery Eskelin, Don Byron, Dave Douglas, Steve Coleman, Steve Turre, Ron Blake, Oliver Lake, Christopher Hale, Don Byron, Uri Caine's Mahler Ensemble, the original SFJazz Collective, the Skatalites, Sheryl Crow, Medeski, Martin & Wood, Soulive, Charlie Hunter, the Roots, Cibo Matto, Mike Gordon, Sean Lennon, Brooklyn Funk Essentials, Bojan Z, John Aram & the Geneva Downtown Orchestra, and Riccardo Fassi.
A quintessential sideman, Roseman does own a small discography with his ensemble the Josh Roseman Unit produced for the Enja label -- Cherry, Treats for the Nightwalker, and New Constellations -- which collectively included Peter Apfelbaum, Barney McAll, Ben Monder, Jonathan Maron, Billy Kilson, Chris Potter, Liberty Ellman, Ben Perowsky and Mark Feldman. Roseman is busy aside from staged music, as a trombone instructor and improvisation coach for the New School For Social Research at N.Y.U., the Harlem School for the Arts, and the Banff Centre in Alberta, Canada. He lives in the Williamsburg district of Brooklyn, N.Y. where he is founder of a cooperative production and performance facility. A born experimentalist, Roseman also plays tuba, euphonium, bass, drums, piano, and his Mac P.C. ~ Michael G. Nastos, Rovi

Ben Street is a New York-area jazz double bassist. He studied at The New England Conservatory of Music in Boston, with Miroslav Vitous and Dave Holland. He has played with many great jazz artists, notably Kurt Rosenwinkel on the Album "Next Step," Ben Monder on the Album "Dust" and the legendary Sam Rivers on the Album "Violet Violets."

Street is the son of Saxophonist and Saxophone mouthpiece maker Bill Street and is native of Maine.

Gregg Belisle-Chi is a guitarist and composer living in Seattle, Washington.

He has maintained a busy career in music performing and recording with various Jazz, Avant-Garde, Pop/Rock, Folk, and Chamber Ensembles. He is a regular member of Jim Knapp’sScrape Orchestra, Andy Clausen’s Shutter and Split Stream Big Band, Fluke (with Brian Kinsella, Chris Symer, and Chris Icasiano), and performs solo and duo music with vocalist Chelsea Crabtree. His newest project is Tyrant Lizard, a collaboration with trumpeter Ray Larsen and bassist Carmen Rothwell.