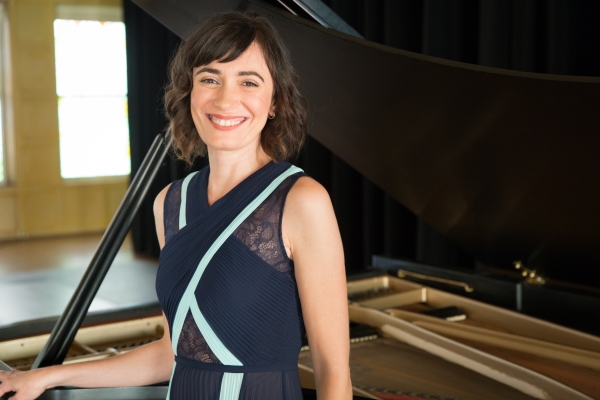 ARTIST BIO
Cristina Valdés joined the faculty of the UW School of Music in Fall 2014 as an artist in residence in the keyboard program. Committed to both contemporary and standard repertoire, Valdés is known for presenting innovative concerts with repertoire ranging from Bach to Xenakis. She has performed across four continents and in a multitude of venues including Lincoln Center, Carnegie Recital Hall, Nordstrom Hall, and the Kennedy Center.

An avid chamber musician, Valdés has toured extensively with the Bang On a Can “All Stars” and has performed with the Seattle Chamber Players, the Mabou Mines Theater Company, the Parsons Dance Company, Antares, and Trio V. Her festival appearances include the Singapore Arts Festival, Brisbane Arts Festival, Foro Internacional de Musica Nueva in Mexico City, New Music in Miami Festival, Festival of Arts and Ideas, and the Festival of Contemporary Music in El Salvador among others. She has also performed with the Johns Hopkins Symphony Orchestra, the Binghamton Philharmonic, and the Stony Brook Symphony Orchestra.

Valdés can be heard on several recordings on the Newport Classics, Albany, and Innova labels. She holds degrees from the New England Conservatory and SUNY at Stony Brook, and is the recipient of an Arts International Grant, the Thayer Award for the Arts, and an Yvar Mikhashoff Trust for New Music grant.