Beethoven: Back to Back;  Pre-concert Lecture: Lisa Bergman 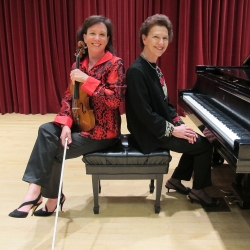 A passionate promoter of classical music, Bergman founder and Artistic Director of the Mostly Nordic Chamber Music Series presented at the Nordic Heritage Museum in Seattle as well as Executive Director of NOISE (Northwest Opera in Schools, Etcetera). She is a national Gracie Award-winning radio announcer on Classic KING-FM, appearing daily, streaming worldwide on the internet. Bergman served for seven years as the Executive Director and is the Adult Piano Retreat Director of the Icicle Creek Center for the Arts in Leavenworth.  She was Artistic Director of the Methow Chamber Music Festival from 2003-2006.

Lisa is also a concert pianist specializing in the fields of collaborative piano and chamber music, and is a graduate of the Juilliard School, the State University of New York at Stony Brook and the University of Washington, cum laude.  She served as an Artist in Residence and member of the University of Washington Music Faculty (1989-1999) teaching in the fields of accompanying and opera coaching.  As a recording artist her discography includes six chamber music CDs and one solo CD.  As 1996 American Artistic Ambassadors, Bergman and violinist Ann Christensen were selected by the United States Information Agency to represent the U.S. on a seven-week tour of New Zealand, Nepal, Korea, Taiwan, Mongolia and China.    She made her Carnegie Recital Hall debut in 1983.

Bergman is a member of the Hall of Fame for the Washington State Music Teachers Association for “extraordinary service, outstanding musicianship, dedication and leadership which have significantly contributed to the development and growth of music education in the State of Washington.”