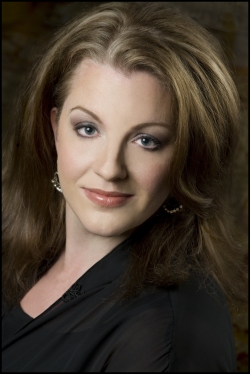 Note: Michaela Martens's appearance is part of the conference The Art and Science of the Performing Voice, April 22 and 23, 2016 at the University of Washington. More information about the conference is available here.

The Boston Globe hails Michaela Martens for her "dense, color-saturated voice" and declares: "She is a passionate and sympathetic vocal actress." Ms. Martens is fast becoming known for her portrayals of some of the most difficult dramatic mezzo-soprano roles in the repertoire. In the 2007-2008 season, she made a triumphant last minute debut at the Lyric Opera of Chicago as die Amme in Die Frau ohne Schatten, a role she repeated for the Oper Graz in a new production by the critically acclaimed director Marco Marelli.

In the 2014-2015 season, Ms. Martens returns to the Metropolitan Opera as Gertrud in Hänsel und Gretel, a role she reprises in her premiere with the Bayerische Staatsoper in Munich. Additionally at the Met, performances include Marilyn Klinghoffer in a new production of The Death of Klinghoffer, and as Judith in Duke Bluebeard’s Castle. She will be heard as Cassandre in Les Troyens with San Francisco Opera and as Herodias in Salome with Santa Fe Opera.

Ms. Martens opened the 2013-14 season with her return to Oper Graz singing the role of Ortrud in Lohengrin, a role she later reprised at the Vienna State Opera. Ms. Martens also made a return to the Opernhaus Zürich as Kostelnicka in Jenůfa, a role in which she made her triumphant debut last season. Ms. Martens was also heard as Kundry in Parsifal and the 2nd Norn in Götterdämmerung at the Metropolitan Opera in the 2012-13 season.

David McDade is on the staff of Seattle Opera as Head of Coach-Accompanists and works with the Seattle Opera Young Artists Program. He was Music Administrator for Washington National Opera from 1997 through 2002, serving as assistant conductor, accompanist and prompter. He made his conducting debut with Washington in a matinee of The Crucible and joined the company on their first tour of Japan.

Mr. McDade came to Seattle with extensive experience having conducted works ranging from Handel's Messiah and Gluck's Orfeo to Copland's The Tender Land and Britten's Phaedra. He first worked in opera in his home town of Portland, Oregon, as a member of the Portland Opera staff from 1986 to 1990. There he supervised a Portland Opera production for the 1990 Rotary International Convention, arranging and conducting a medley from Kern’s Show Boat.

In the span of his career he has worked with Annapolis, Philadelphia, and Frederick, Maryland, opera companies as well as with the Ash Lawn Highland Summer Festival, for which was Resident Conductor. Mr. McDade graduated from Portland State University with a Bachelor of Music in Voice and has a Master’s of Music in Conducting from the Peabody Conservatory in Baltimore.