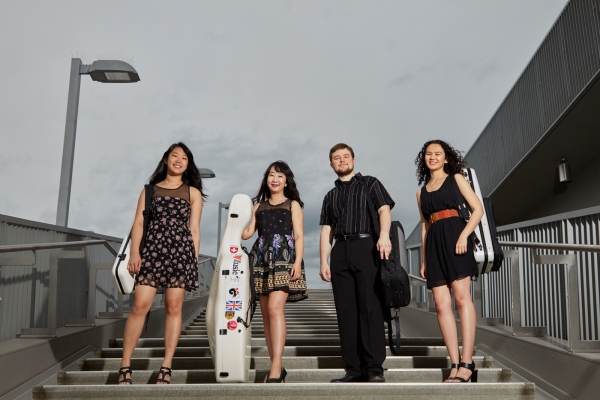 Yang Lu is a Doctor of Musical Arts student in Cello Performance at the University of Washington. Yang has been performing internationally from Asia, Europe to North America. She had orchestral performances at Carnegie Hall and Strathmore. She has performed at the opening ceremony for the 2010 World Expo in Shanghai. Yang was a member of Asian Youth Orchestra and AIMS Orchestra in Graz. She was also the cello principal at UWSO. She is active in the Seattle chamber music community. Currently Yang is a member of Trio Camellia and Corda Quartet.

Heather Borror is an undergraduate at the University of Washington pursuing dual degrees in Violin Performance and Biochemistry. Her mentors include Ronald Patterson and Carol Sindell. Heather served as concertmaster for the UW Symphony Orchestra in 2015-16. She is a current officer of Chamber Music Club @ UW, a group that organizes chamber music opportunities for students across all disciplines. Heather is an alumna of the Portland Youth Philharmonic and has participated in the Marrowstone and InterHarmony International summer music festivals. In 2011, she performed at the Kennedy Center for Performing Arts with the NAfME High School All-National Honors Orchestra. Beyond chamber music, her current pursuits include volunteer work at the UW Medical Center and undergraduate research with the UW Department of Pharmacology.

Judith Kim is a Washington native violinist. Studying with Ronald Patterson in high school, she chose to continue under his teaching at the University of Washington. Currently in her junior year, she is pursuing degrees in Physics and Violin Performance. As a chamber music enthusiast, she hopes to further the community through her officership of Chamber Music Club. She is looking forward to collaborating with her fellow Corda Quartet musicians this year!

Emmeran Pokorny is a student in Viola Performance at the University of Washington, with Professor Melia Watras. He was born and raised in France, where he studied violin, piano, and voice for many years. While in France, Emmeran studied at the Conservatoire a Rayonnement Regional de Boulogne-Billancourt as well as the Conservatoire de Musique d'Aulnay-sous-Bois, before moving to the United States in 2008. Emmeran is an avid chamber music and baroque music player and he plays in the official University of Washington String Quartet, the Corda Quartet. He has also played in several ensembles and groups, such as the SCREE! String Quintet, and forms the Rocoempo Trio with his brothers. Through the University of Washington collaborative performances, Emmeran Pokorny has performed several times with the Seattle-based group Pacific Music Works.