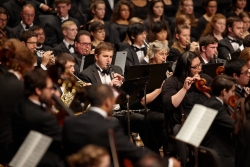 Abbie Naze is a second year graduate student at the University of Washington where she is pursuing her Master’s Degree in Orchestral Conducting under the leadership of Dr. David Rahbee and Maestro Ludovic Morlot. As a Teaching Assistant, she conducts the Campus Philharmonia Orchestra and periodically the University of Washington Symphony Orchestra. Abbie has been accepted to numerous workshops and festivals for both conducting and cello, such as The Pierre Monteux School, The International Conducting Workshop and Festival in Sofia, Bulgaria, and The New York Conducting Institute. A native of North Dakota, Naze graduated from Minot State University with a Bachelor of Arts Degree in Music with a concentration in Cello Performance.

Mario Alejandro Torres, a native of San Pedro Sula, Honduras, is in his first year of doctoral studies at University of Washington, pursuing a degree in orchestral conducting under the mentorship of David Alexander Rahbee and Ludovic Morlot. Mario is co-conductor of UW Campus Philharmonia Orchestras, and assistant conductor for UW Symphony Orchestra. Mario holds a Masters of Music in Orchestral Conducting from Ithaca College under the mentorship of Jeffery Meyer. As a violist, he holds a Bachelor (’13) and a Master (’14) of Music in Viola Performance from Northwestern State University of Louisiana. Additionally, Mario has been a conducting student of Michael Jinbo at the Monteux School and Music Festival, where he has also served as an orchestral assistant. He has also performed in master classes led by Larry Rachleff, Donald Schleicher, and Mark Stringer.